An Anglican Church hall in North East Valley is set to be demolished to make way for social housing, as demand for accommodation in Dunedin continues to rise.

Anglican Parish of Dunedin North vicar the Rev Michael Wallace told the Otago Daily Times he was in talks with Habitat for Humanity to build housing on the site of St Martin’s Hall in Northumberland St.

Much of the old hall — parts of which were considered unsafe in an earthquake — has been empty since 2013. The rest was vacated last year. 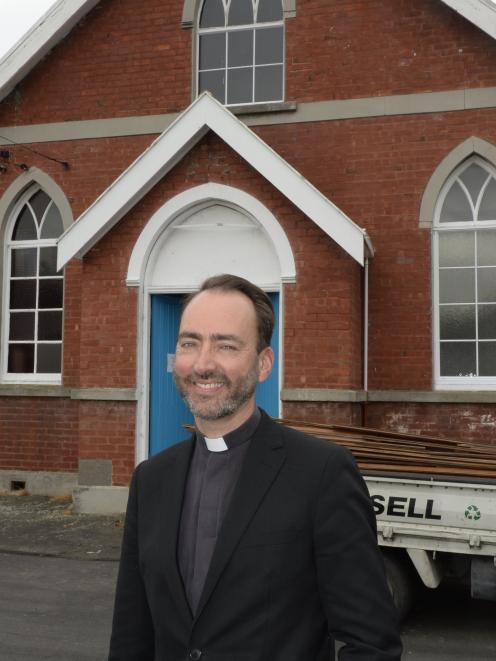 Anglican Parish of Dunedin North vicar the Rev Michael Wallace says demolition of the parish’s St Martin’s Hall in North East Valley could pave the way for new houses for those in need. Photo: Gregor Richardson

Mr Wallace said plans were still being finalised, but the idea was to demolish the entire hall and develop a cluster of one- and two-bedroom residential units.

The houses would be built by Habitat for Humanity and made available to those in need, although when the work would take place was also not yet confirmed, he said.

Consent to demolish the old hall was not required, as it was not a listed heritage building, but consent for new houses would be, he said.

‘‘We haven’t signed anything with Habitat but we’re working with them about the possibilities there.

‘‘We’re not rushing into anything, but ... we’re really happy that the site that was used by the community so well for decades and decades, but is not able to continue being used in that way, has the possibility of serving the community in a whole other way.’’

The plan was a response to the growing housing crisis in Dunedin, and was the suggestion of a parishioner who was also involved with Habitat for Humanity, he said.

‘‘I’d say, in the past week, I’ve been contacted by three people desperate for housing — that’s just in this week.’’

The old hall was one of two buildings owned by the Anglican Church deemed to be a seismic hazard in 2013, in the wake of the Canterbury earthquakes.

The other was the Holy Cross Church in St Kilda, which had since been sold and strengthened, he said.

St Martin’s Hall was actually two buildings joined by a foyer, which had been well used by the community over the years, including as the base for the St Martin’s Friendly Flea Market and a toy library.

The rear of the complex, built in the 1920s, had been found by engineers to be at risk of ‘‘serious collapse’’ in an earthquake, and had been closed since 2013.

The front part of the hall was still considered safe, but had also been empty since a toy library based there moved out last year, he said.

The church had received a quote of $50,000 to strengthen the hall, which was ‘‘too much money to spend’’ when the church had other facilities to use, he said.

Once built, the houses would add to those the parish already owned, in Cumberland St next to the All Saint’s Anglican Church, where four units built by parish were now offered to those in need, in partnership with the Salvation Army.

‘‘We already have a model of providing units.’’