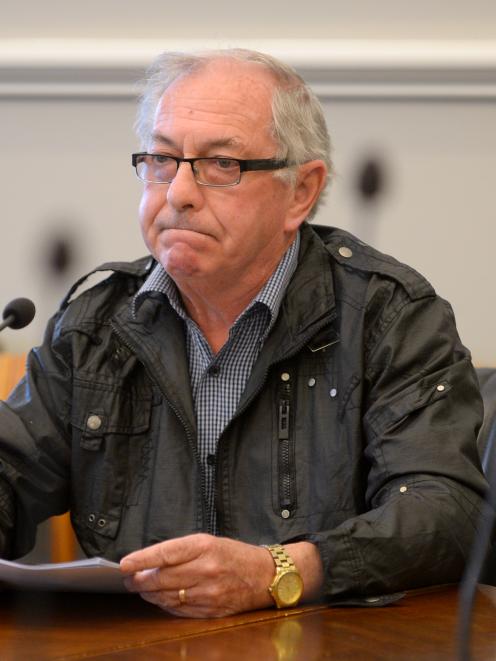 Colin Weatherall addresses the alcohol policy hearings yesterday. Photo by Gerard O'Brien.
A top public health official was the source of information that Dunedin punters were offered cheap drinks in exchange for filling in a submission form on a draft local alcohol policy, it has been revealed.

But details of the alleged enticements remain unclear.

The enticement claim was immediately denied by the hospitality industry, which challenged him to reveal his source.

Supported by district licensing committee (DLC) deputy chairman Cr Andrew Noone, Mr Weatherall yesterday reappeared before the committee and reported a male medical officer of health told a weekly meeting on licensing matters on November 3 he had proof of enticements.

Without directly naming the official, Mr Weatherall said the medical officers of health who attended the meeting were Dr Keith Reid and Dr Marian Poore.''

I believe the medical officer of health is a trustworthy person. I have no reason to doubt his word,'' Mr Weatherall said.

He would leave it up to the medical officer of health to elaborate when he appeared at the Lap hearing on December4.

Dr Reid is out of Dunedin and could not be contacted by the ODT or Southern District Health Board communications staff yesterday to answer questions about which bar or bars were involved, the circumstances and if he was taking any further action.

Dunedin inner-city licensee forum spokesman Richard Newcombe said it was ''highly frustrating'' there were still no details about the alleged incident.

About 3300 of the 4200 submissions received on the draft Lap came from forms supplied by the industry.

The high number reflected the level of public discontent with the proposals, Mr Newcombe said.

Public Health South medical officers of health are scheduled to make the last submission to the hearing.

But Mr Newcombe hoped the industry would be given an opportunity to respond to any allegations.

Hearings committee chairman Mayor Dave Cull reiterated the committee would not be influenced by the volume of submissions. Rather, decisions would be based on content and evidence.

The staff were increasingly using security to remove intoxicated visitors, and alcohol-related problems were taking up more time of staff, who should be focusing on urgent patients.

The proposals would create a ''3am swill'' and failed to make on-licences the more attractive place to be, which was what was needed, he said.

Mike McLeod, from Chicks Hotel, said his bar had turned its focus from alcohol to entertainment, but he was concerned about proposed restrictions on footpath areas and residential bars.