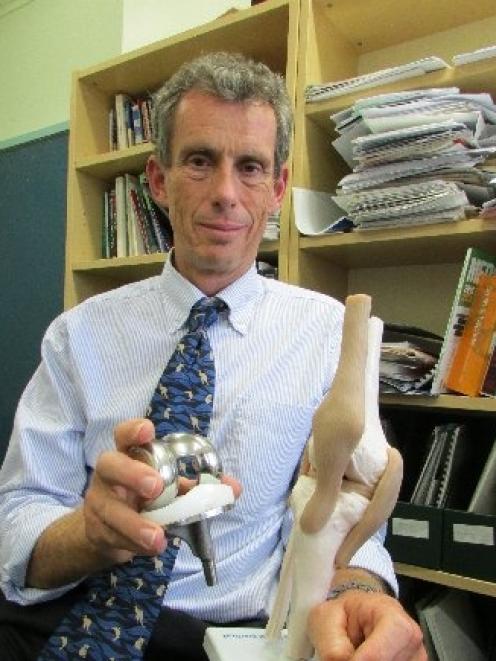 Consultant orthopaedic surgeon Associate Prof David Gwynne-Jones is concerned a ''tsunami'' of knee replacement surgery is approaching. Photo by Brenda Harwood.
The Southern District Health Board has been the focus of close attention this week, with concerns expressed across the health sector about the population-based funding model, staffing levels, ageing infrastructure at Dunedin Hospital, the recent IT outage, and proposed cuts to mental health beds. The Star chief reporter Brenda Harwood examines the issues.

The issues were highlighted in two meetings late last week - a stop-work meeting attended by 300 nurses, and a public meeting called by local Labour MPs, which involved Labour health spokeswoman Annette King and a panel of health consumer advocates and health professionals.

Speaking at the meeting, and in an interview with The Star, orthopaedic surgeon Associate Prof David Gwynne-Jones said it was generally accepted that Dunedin Hospital's theatre block was ''past its use-by date'' and needed replacing. Dunedin was the last major hospital in New Zealand not to have a significant upgrade of facilities.

While the operating theatres were ''perfectly safe'', reports of leaks in the roof of the theatre block were symptomatic of the lack of investment.

The situation of nursing graduates struggling to find work was a ''perverse outcome of a system under stress'', he said.

Mental health and aged care advocate Max Reid, a former chief executive of Hospice Southland, highlighted the ''failure'' of the population-based funding model in the south.

Yesterday, Mr Reid said the decision by the Southern DHB to scale back proposed cuts to Wakari Hospital mental health beds, from the original proposal to cut 12 beds down to 8, was positive.

However, he remained concerned the ''ring fence'' around mental health funding had been removed.

Health board chief executive Carole Heatley dismissed Friday's meeting as a ''political campaign in an election year'' and said the board provided quality health and disability services to the southern community.

It was important to understand that the Southern DHB was funded in the same way as the rest of New Zealand, but that the region did not have a growing population.

Dunedin North MP and associate Labour health spokesman David Clark said there was ''plenty to follow up on'' from the meeting. It was clear the population-based funding formula was producing inequities.

''I have deep respect and concern for the staff who are doing a thoroughly professional job and are only speaking out reluctantly out of concern for patient care,'' he said.

Health Minister Tony Ryall said the Southern DHB's budget was $800 million this year and had increased by $107 million in the past five years, not including capital spending.

The population-based funding formula was regularly reviewed, with a review now in its early stages.

The nursing situation in New Zealand was part of an international trend, although there were more than 3000 extra nurses working in public hospitals.

''I am sure more graduate nurses will find jobs in the next few months, including in aged care, GP clinics and private hospitals,'' Mr Ryall said.