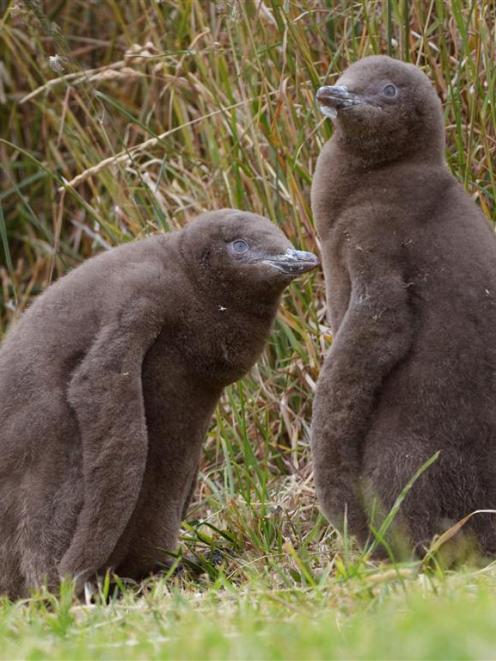 "They do suffer ... when it's really hot, for the first 10-14 days, when the adults are still sitting on them,'' Penguin Palace manager Lisa King said.

"Once they get a bit bigger, they [the adults] don't sit on them so much.''

About 115 chicks at monitored sites from Otago Peninsula to Moeraki had survived thus far, the Department of Conservation said.

The number of chicks that died this year was "high'', Ms King said.

But it was not unheard of.

"We had one really hot summer a few years ago where pretty much all our chicks died,'' she said.

A National Institute of Water and Atmospheric Research (Niwa) analysis showed November temperatures in Dunedin were actually .4degC below average this year.

But MetService said there had been a heatwave over four days in late November when temperature highs were 25degC-26degC.

That may have sounded the death knell for some of the chicks.

There were also 16 days where the daily high reached 16degC or more, which Doc said was the threshold for "discomfort to adult penguins''.

Ms King said heat was definitely not the only factor in the chicks' deaths, but it could exacerbate other problems.

"Some of the birds have died by avian bacteria, which is potentially brought on by the heat,'' she said.

"They may not have died solely from the heat, but they may have died [from related causes]. It's all part and parcel, really.''

Any dip in chick survival numbers could have a snowball effect, she said.

In a press release about the penguin chicks' welfare, Doc said yellow-eyed penguin breeding pairs had hit "rock bottom'', dropping below 190 pairs, down from an estimated 491 in 2012.