Hillside message delivered to no avail 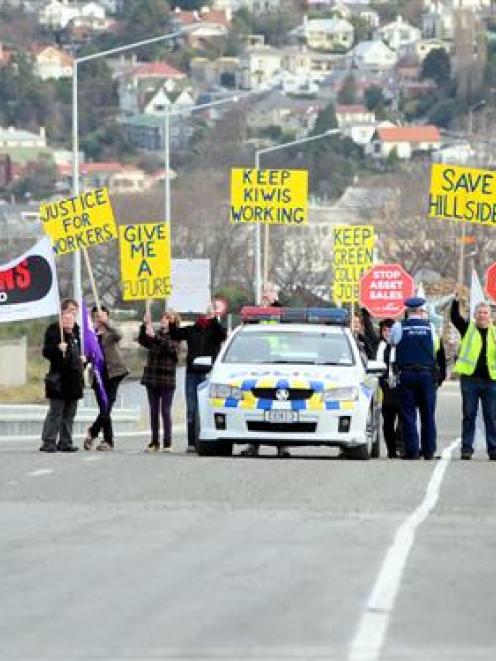 "Save Hillside. Save our workers. Stop New Zealand jobs going to China."

Police had kept an organised group of about 30 placard-waving protesters well away from the official ceremony, but a construction worker in the south stand of the Forsyth Barr Stadium was determined to be heard.

Brandishing a cut-off section of downpipe, which he used as a makeshift loud-hailer, he interrupted speeches to sound out his message of support for job-threatened Hillside workers.

Chants from the protesters, kept on the other side of a bridge across the Water of Leith, were distant on the harbour breeze as Mr Joyce carried out his ribbon-cutting duties.

The calls to "keep Hillside jobs here" were renewed when Mr Joyce led a procession back across the bridge and then stopped to acknowledge the protesters. 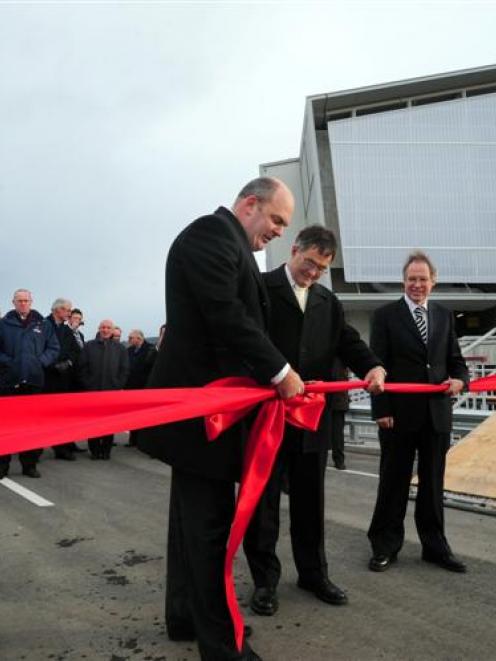 Mr Joyce told protesters the Government had inherited "a rail company which is broken" and improvements to the organisation had to be made on a commercial basis, free from political considerations.

"They actually have a very big job to turn [KiwiRail] around. It's not making anywhere near enough money and it needs to be able to make its own decisions," he said.

Hillside employees were frightened about what the future held for their families, should they lose their jobs and livelihood, Mr Johnstone said.

An independent review of KiwiRail's tender decisions - contracts for work valued at more than $700 million have been awarded to Chinese firms - would not happen, Mr Joyce said in response to a question from Mr Ingram.

Despite an insistence that the SOE minister was obliged to intervene on the grounds of considering the wider economic and community implications, Mr Joyce told protesters those considerations were the responsibility of KiwiRail.

Afterwards, Mr Joyce said he "understood the situation" and was "very concerned" for the 40 Hillside employees. However, companies were "not frozen in time, things change, and workforces change", he said.

Hillside's employees would return to numbers similar to those of about seven years ago, before a contract was awarded for work that had now been completed, he said.

KiwiRail has about 4200 employees and the company was committed to securing more work and raising profits, he said.

The Save Hillside campaign moves to the Octagon tomorrow, where a public rally is being held at 1pm.