Historic cobbles to be reused 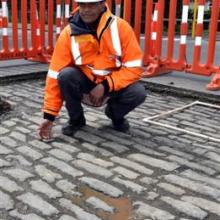 When the cobbles were discovered in late August by a Fulton Hogan road maintenance crew, work was halted until archaeologists could assess the site.

At the time, New Zealand Heritage Properties (NZHP) principal archaeologist Hayden Cawte said the area was a known archaeological site and should have undergone an assessment before work was started.

Yesterday, the council received ''archaeological authority'' to proceed with work to record and extract the cobbles.

The cobbles would be packed on to pallets and stored in plastic wrap at a warehouse in North Taieri until a decision was made on their future.

In a statement, Heritage New Zealand said the cobbling was ''a rare site for Dunedin''.

''Although 19th-century kerbing and channelling has been found previously around Dunedin during road works as footpath cobbling, this is the first street cobbling to be discovered in situ.''

It was estimated the cobbling could be about 150 years old.

NZHP archaeologist Naomi Woods was on site yesterday drawing and observing the cobbles.

Heritage New Zealand said it was ''recommended'' the cobbles be used in ''the redevelopment of the Jetty St area''.

''The cobbles would last better in a pedestrian environment, so this should be given priority when considering reuse options.''

A project to create a pedestrian-only walkway in Jetty St hit a roadblock in August, when emergency services came out against the plan.

But council heritage policy planner Dr Glen Hazelton said yesterday council staff had been ''working through those matters with emergency services over the last couple of months''.

''We're hoping to go back to [a] hearing with the outcome of those discussions ... prior to Christmas.''

Because of the small number of cobbles that were being uncovered and removed by contractors, it was unlikely all of Jetty St would be paved with cobbles.

''They're more likely to be a decorative element rather than a fully-paved footpath.

''Either way ... we'll find a way to incorporate them into the warehouse precinct.''

But that could still be some way off, Dr Hazelton said.