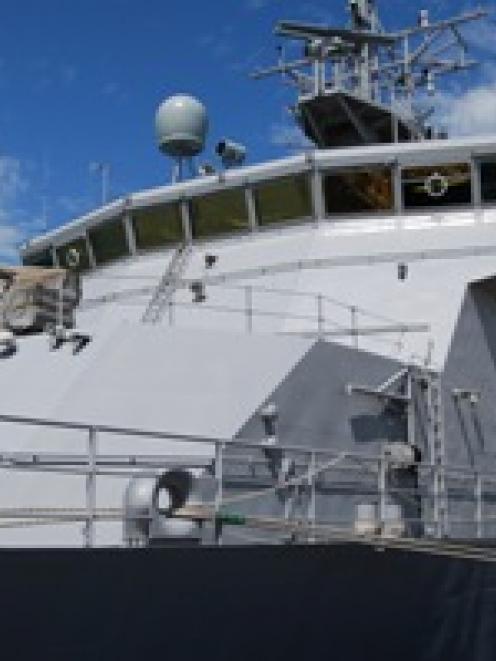 HMNZS Otago at her berth in Melbourne. Photo by navy.mil.nz
Engine problems have struck the Royal New Zealand Navy's newest offshore patrol vessel HMNZS Otago, before it could even cross the Tasman Sea on its maiden voyage.

Otago was carrying out sea trials off Melbourne to test her systems when the faults were found, the Defence Force said today.

She was due arrive at Auckland's Devonport Naval Base on Friday.

Otago is under warranty. The engine manufacturers MAN and the ship's builders BAE Systems were working with the ship's engineers to repair the faults.

Parts may have to be found overseas and repairs could delay the voyage by some days, said Commander Phil Bradshaw, director of the defence communications group.

The 1600 tonne, 85 metre-long ship is the first of the navy's two offshore patrol ships and its sister ship HMNZS Wellington, the final ship of seven in the Project Protector plan, was due to be delivered next month.

The $500 million Project Protector programme has been bedevilled with problems and delays.

Defence Minster Wayne Mapp said delays and disputes were largely because the Labour Government chose a one-off solution with the HMNZS Canterbury, which led to a very large repair bill.

Last month the Government said it had reached a $84.6m settlement with BAE Systems to fix problems with the Canterbury.