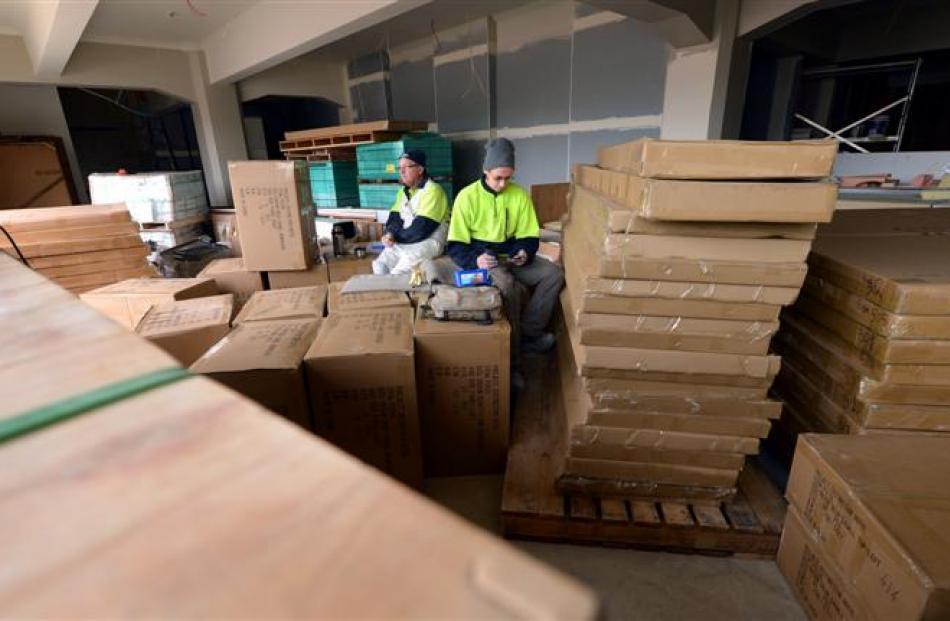 The Bond St side of the Distinction Hotel.

It is the final push to the finish line for Dunedin's Distinction Hotel, due to open in less than a month.

The former chief post office building was swarming with construction workers yesterday: 126 were on site.

They were focusing their efforts on the 121 guest rooms, building owner Geoff Thomson, of Distinction Hotels, told the Otago Daily Times.

Most of the interior decorating work had been completed and the ''main focus now is getting the joinery and floors finished,'' he said.

There was a ''huge volume'' of furniture going into the building, from beds to cabinets and desks.

Most of that furniture was passing through the lobby, which yesterday housed a daunting collection of flat-packed furniture and floor and wall tiles.

An extra six builders had been drafted in to help install that joinery, Mr Thomson said.

''The real focus is on the rooms at the moment. We'll come back to the lobby later.''

When completed, the lobby's back wall would be lined with art, he said, while outside a canopy between the lobby and the under-construction four-storey car park would shelter guests as they arrived and departed.

That car park was ''coming along really well''.

Its steel and concrete panels were expected to go up in ''three to four weeks'', Mr Thomson said.

Water was expected to be flowing on Monday, while hallway carpet would be a last-minute addition.

A large crane which had spent several weeks skirting the building's exterior was being used to allow workers to seal windows, he said.

Some furniture and building materials were being placed in the building with the crane.

Workers were also ''flat out'' in the hotel's plant rooms, he said, while a five-tonne air-conditioning unit would be installed on Sunday morning.

In an effort to reduce the building's energy consumption, the air-conditioning unit would be used to preheat the hotel's hot water, he said.

It was hoped that could cut the hotel's hot water bill by almost 75%.

While the first public bookings were for mid-October - in time for the October 24 Neil Diamond concert - parts of the hotel would open earlier to help staff settle in, he said.

''We've got to be open for the concert but we'd like to have some rooms up and running before that.''

The building's original vaults - set to become private dining spaces - would not be finished on opening day but would be ready before Christmas, he said.

An interior designer was due to inspect the vaults this week.

While ''a few delays with a few suppliers'' had caused him headaches, the ''end is in sight''.