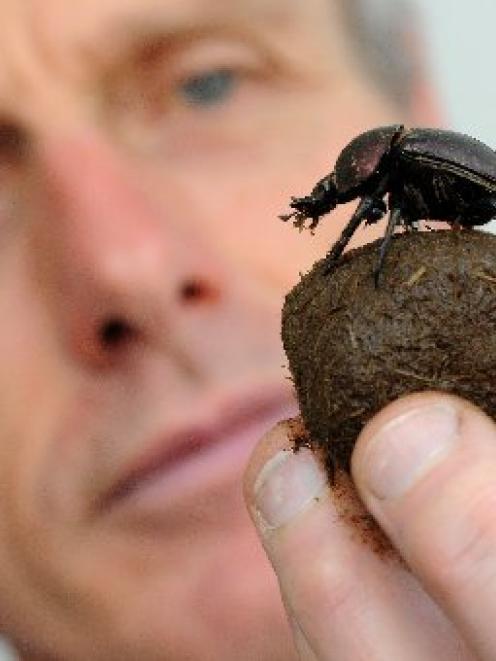 Prof Marcus Byrne, of University of the Witwatersrand, in South Africa, holds a kheper dung beetle on a dung ball. Photo by Chris Collingridge.
A winner of the wacky version of the Nobel Prize for proving dung beetles navigate using the Milky Way will speak at next month's ScienceTeller festival in Dunedin.

South Africa's University of the Witwatersrand Associate Prof Marcus Byrne and his Swedish colleagues picked up an Ig Nobel Prize for the research, which involved dressing up beetles in specially designed caps and boots.

His research proved the insects used the Milky Way to orientate themselves, and that they climbed on top of their dung balls to cool their bodies as they rolled the ball away from competitors at the dung pile.

According to its website, the Ig Nobel Prizes honour ''achievements that first make people laugh, and then make them think''.

Other winners this year included researchers who assessed the effect of listening to opera on mice heart transplant patients and a team of researchers who discovered the process by which onions make people cry was even more complicated than scientists previously realised.

Prof Bryne said festivals like ScienceTeller were important. ''ScienceTeller is one way to get across what is so.

And, to do it in a way that is fun and attractive, so that we can be coaxed to examine our own world view and decide if science offers something closer to the truth, compared to its many alternatives,'' he said.

Prof Byrne will give a two talks at Hutton Theatre, Otago Museum, as part of the festival - ''Dirty Dancing - Dung Beetle Celestial Orientation'' on Saturday, October 26 at 5pm and ''Joe Public meets the Gibby Gabbies - using insects for public awareness of science'' on Sunday, October 27 at midday.