The audience listens to Martin Dippie. Photos: Peter McIntosh
Inconsistency in the application of development rules across Otago is halting growth, an specialist panel says.

The four-person panel answered questions about Dunedin property and business at the Property Council New Zealand event in the city yesterday. 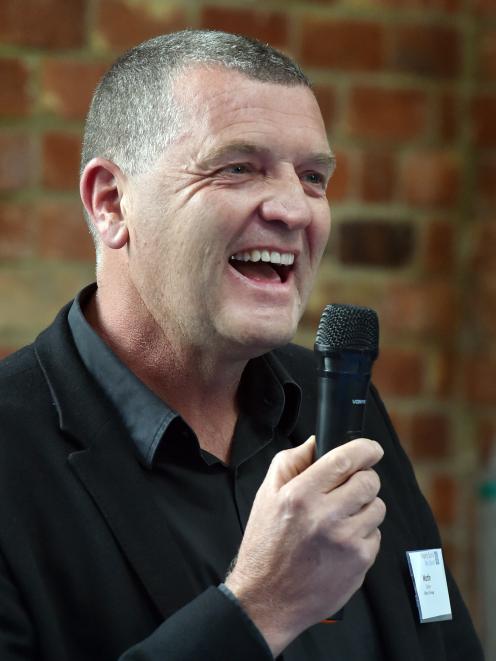 Otago businessman Martin Dippie shares his thoughts on the Dunedin property market at a panel discussion at New New New, in Dunedin, last night.
ANZ property finance South Island regional manager Andrew Weastell said there was ''quite a variance'' between more metropolitan centres and provincial councils in how legislation such as the Resource Management Act and Building Act were applied.

''There does not seem to be a whole lot of consistency to how this plays out.''

Dunedin businessman Martin Dippie said when trying to find solutions with councils there was a ''magical line'' beyond which there were different standards.

Beyond this, most panel members were optimistic about Dunedin's prospects.

Mr Clear said the city was ''having its day in the sun''.

Increased property values were underpinned by long-term construction, such as the Dunedin Hospital rebuild, and Dunedin City Council spending increases.

''We have been catching up with the rest of New Zealand, really.

''It's suddenly become quite trendy to be in Dunedin.''

Mr Dippie said the planned harbourside development would be ''very good'' for the city.

However, some 2GP district plan zoning rules were ''not brave enough'', he said.