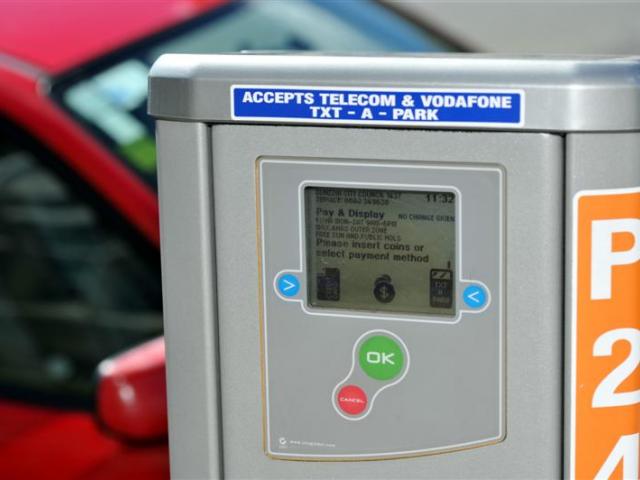 Parking fees will increase this Thursday. Photo by Gregor Richardson.
Parking charges are set to increase for the first time in a decade in Dunedin, in a move that will lead to some fees jumping by 50%.

Among the changes, the cost of parking along George St - where a 30-minute maximum stay applied - would increase from $1.50 to $2.

Four-hour parks in the outer zone would increase from $1 an hour to $1.50 an hour, while all-day parks which used to cost $5 a day would now cost $6.

Council infrastructure general manager Simon Drew said the changes were the first in a decade for the city's on-street parking, and would bring fees more into line with those for private and council-owned off-street parking facilities.

The changes were first signalled earlier this year, when a staff report recommended the changes, which were expected to bring in about $1.5 million in extra revenue.

At the time, Otago Chamber of Commerce chief executive Dougal McGowan said the extra costs could negatively affect the behaviour of shoppers in the central city.

"It's supply and demand. When prices go up, people will change their behaviour.

Yesterday, he retained those concerns, saying parking was one of the "essentials" for retailers, who were struggling even before these changes were introduced.

The city needed to be making it easier for retailers to attract customers, rather than introducing changes that could drive them further away, he said.

The new charges had been expected to come into force on July 1, but Mr Drew said yesterday they had been delayed by the need to update parking meter software.

He expected a strong public reaction, given parking remained an "emotive subject".

However, the new charges were just one part of a wider piece of work getting under way to review the city's existing provision of car parking, together with its costs, and compare what Dunedin offered with other centres.

"We will look at things like parking density in the city, the cost of parking compared to other cities, so that we have evidence and facts to talk about.

"At the moment, things are potentially emotive - we don't have the facts."

Asked if it made more sense to consider parking charges once that wider work was finished, Mr Drew said: "You've got to start somewhere. Now's as good a time as any."

A game of catch up with parking buildings to make more money.

The end game: destroy carparks in an attempt to force people onto inefficient & inconvenient buses or empty cycle lanes, and take more $$ from those who dare drive their cars. The arrogance of the DCC. Vote them out!

A greens led council and council staff with a relentless agenda to rid Dunedin of cars. No matter the consequences for business.
Vote the fools out of office and replace the recalcitrant staff.

If the dcc were serious about raising revenue they would take over the wilson car parks.