Indelible backer of All Blacks win 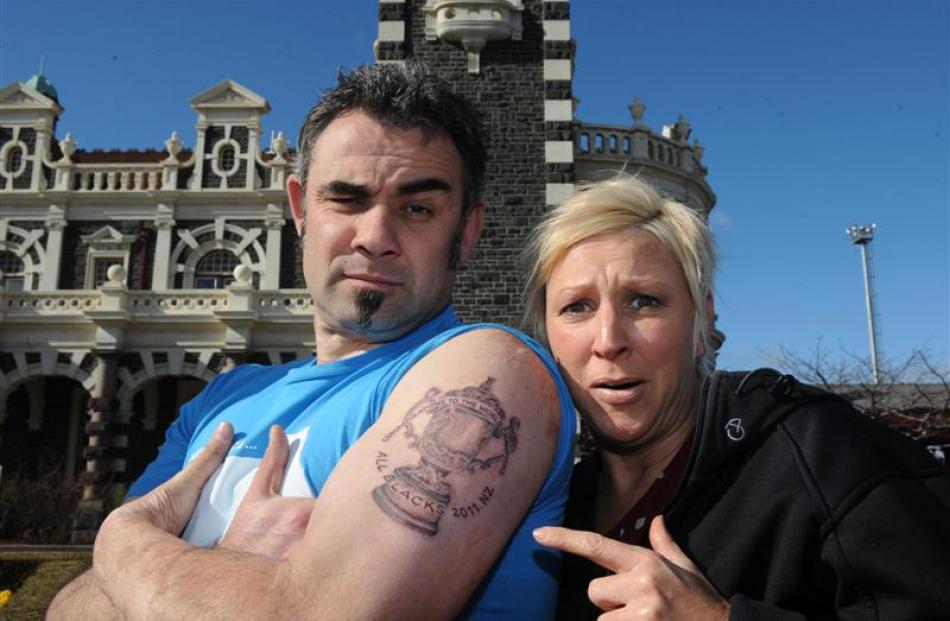 Breakfast radio host Nicky Rennie is more than a little surprised at the result of her tattoo idea for co-host Damian Newell. Photo by Stephen Jaquiery.

He's not normally averse to making a statement, but even Dunedin radio disc-jockey Damian Newell is not sure about this declaration.

Mr Newell is clearly rooting for an All Blacks win at the Rugby World Cup after yesterday getting a rather large image of the Webb Ellis Trophy tattooed on his arm.

The words: "Congratulations to the world champions All Blacks 2011 NZ" appear etched into his skin around the trophy.

Mr Newell said when he agreed to his More FM breakfast co-host Nicky Rennie's idea, he had not imagined a tattoo quite so big.

Ms Rennie, whom Mr Newell said "nagged" him until he agreed to do it, had drawn a prototype for the tattoo, which tattooist Aaron Manuel refined as he inked the image on freehand.

The final product, while beautifully done, was "...about four times bigger than we expected", Ms Rennie said. The tattoo went ahead after 1000 people posted a "like" on a dedicated Facebook page this week.

One person who did not "like" the idea was Mr Newell's partner, Debra King, who started an anti-tattoo Facebook page titled "Don't do it Dames", seeking 500 "likes" to can the plan.

That page didn't even register 100 likes.

Mr Newell said he sent an image of the finished tattoo to his partner yesterday morning, and since then it had been "radio silence".

While a committed All Blacks fan, he was not single-minded about rugby.

This was one way to show his support, he said.

"They're putting their bodies on the line, the least I can do is give them half a pasty white bicep."

While his was on a new scale, Mr Newell is not the first Otago man to pay to put ink where his mouth is.

On a dare in 2007 then-Otago University student Kris Allen took optimism even further when he had the words: "NZ AB's B2B [back to back] RWC winner 2007-2011" etched on his thigh on a dare, three days before that world cup tournament started, such was his confidence.

Now living in Australia, it was reported earlier this year Mr Allen had taken a "bit of stick" over the years at his misplaced optimism. Even his mother had expressed disappointment.

He was crossing his fingers for 2011, he said, as it would make his permanent reminder at least half right.