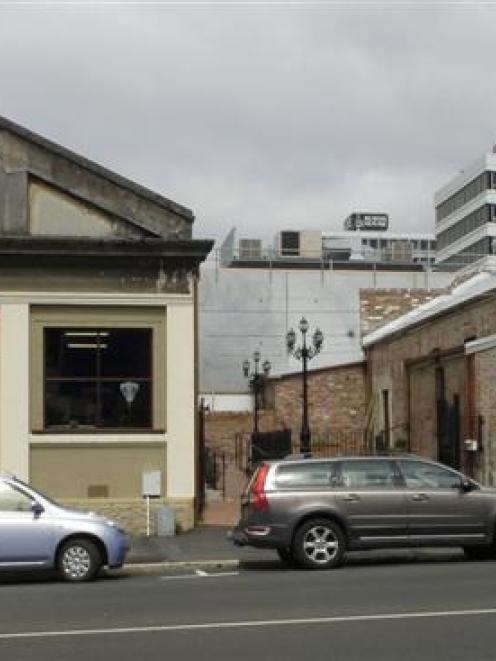 The restored and reused buildings at 73 St Andrew St.
Saving a historic building to allow for what is described in insider's jargon as "economic reuse" requires an owner's zeal, and a result that will attract a tenant.

Those aspects were in place for buildings at 73 St Andrew St, but co-owner Mark Wallace says the road to get there was so hard he would not do it again.

If the city really wanted heritage buildings saved, Mr Wallace said, the Dunedin City Council, the New Zealand Historic Places Trust (NZHPT), banks, insurance companies and others all needed to do more to make it possible for developers.

From a construction perspective, there were extra challenges that had to be overcome to make such a project work.

"We had buy-in right from the start in terms of what they wanted to achieve to keep the heritage look, which was the important thing.

"If the owner of the building does not have that sort of buy-in, then you are up against it."

Mr Bulling said the building was "a wreck" when the work began.

All the windows were out, the bricks required work and the foundations, which had "pretty much eroded away", required underpinning.

"The materials you use have to be in keeping with the heritage look, instead of bringing in materials that are too modern and look out of place.

"The bricks were kept in their natural state, rather than trying to replace or repair them.

The mortar had fallen away between the bricks, and we had to repoint them.

"We had to dig out underneath the existing walls in a number of different places, and fill it up with mass concrete."

Asked what was more expensive - demolishing a building and rebuilding, or upgrading a heritage building - Mr Bulling said that depended on what condition the building was in.

"It does take time and you have to have patience. It's not a fast way of doing construction.

"It comes down again to the owner - whether they care for it or have a passion for it - [or] whether they are just looking for an opportunity for capital gain."

"Peter [Wilson, co-owner] and Mark wanted to preserve them and keep them as authentic as possible, at the same time making a viable business with a return."

While the project is now complete, and tenants are in place, Mr Wallace was clearly left with some bad memories from the experience.

"I'd probably never do it again," he said.

"I had trouble with the historic places trust, the Dunedin City Council, with banks, getting insurance ..."

The council was "hell-bent" on saving buildings, Mr Wallace said, but still charged consent fees and, once the building was done up, rates tripled because the value of the property had risen.

Insurance companies needed to "come to the party" and discount insurance, once earthquake-proofing had been done and electrical systems had been replaced.

"There should be a much, much bigger discount."

Also, the NZHPT needed to communicate better with the council, and needed to be more accurate in defining what it required from developers, Mr Wallace said.