Invader possum was 'staring at me like I was Satan' 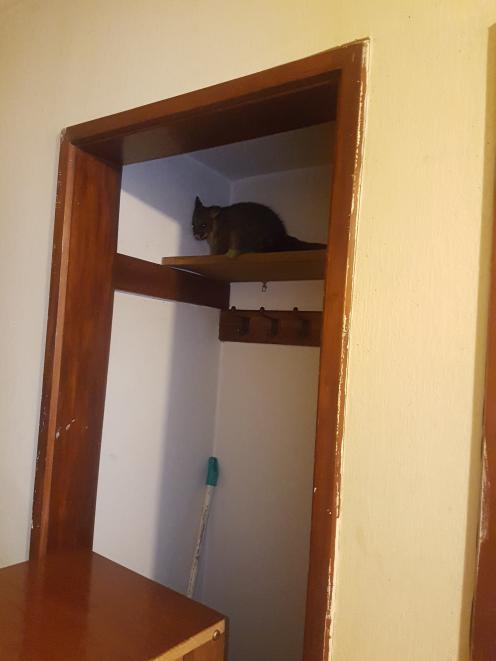 A possum that made an early morning incursion into a Dunedin home. Photo: Alex Kaspin
A home-invading possum that sparked a police callout slunk into a Dunedin woman's room and sat on her curtain rail, "staring at me like I was Satan''.

Calton Hill resident Alex Kaspin said the sharp clawed pest climbed in her bedroom window and paid an uninvited visit in the middle of the night.

Ms Kaspin said she credited her dog Pearl with looking after her during the incident.

She was asleep about 2am last Friday when Pearl began "barking, nudging and growling at me to wake up''.

Ms Kaspin said she woke up and looked at her dog, wondering "what are you doing, it is two o'clock in the morning?''.

She turned around and saw what she thought was a cat.

"Then I realised that there was a possum sitting on top of my curtain staring at me like I was Satan.''

Ms Kaspin said she managed to scare the animal out of the bedroom with a vacuum cleaner, but it took up lodgings in a hall cupboard.

She called the Dunedin City Council, but was told the situation was outside the council's jurisdiction, and transferred to police.

That surprised her, and left her wondering "would they taser the little bastard?''

"They're going to put a possum in jail, that's all good,'' she joked.

Police arrived quickly, saw the funny side of the situation, and used a mop handle and bucket to get the possum outside.

It took "quite some prodding and poking'' to get the persistent pest to move, but eventually it was nudged off the shelf, and "thank goodness it ran for the nearest exit''.

Ms Kaspin said she planned to sleep with her window closed in future.

you know they say a midnight visit from a possum is a sign of good furtune to come...