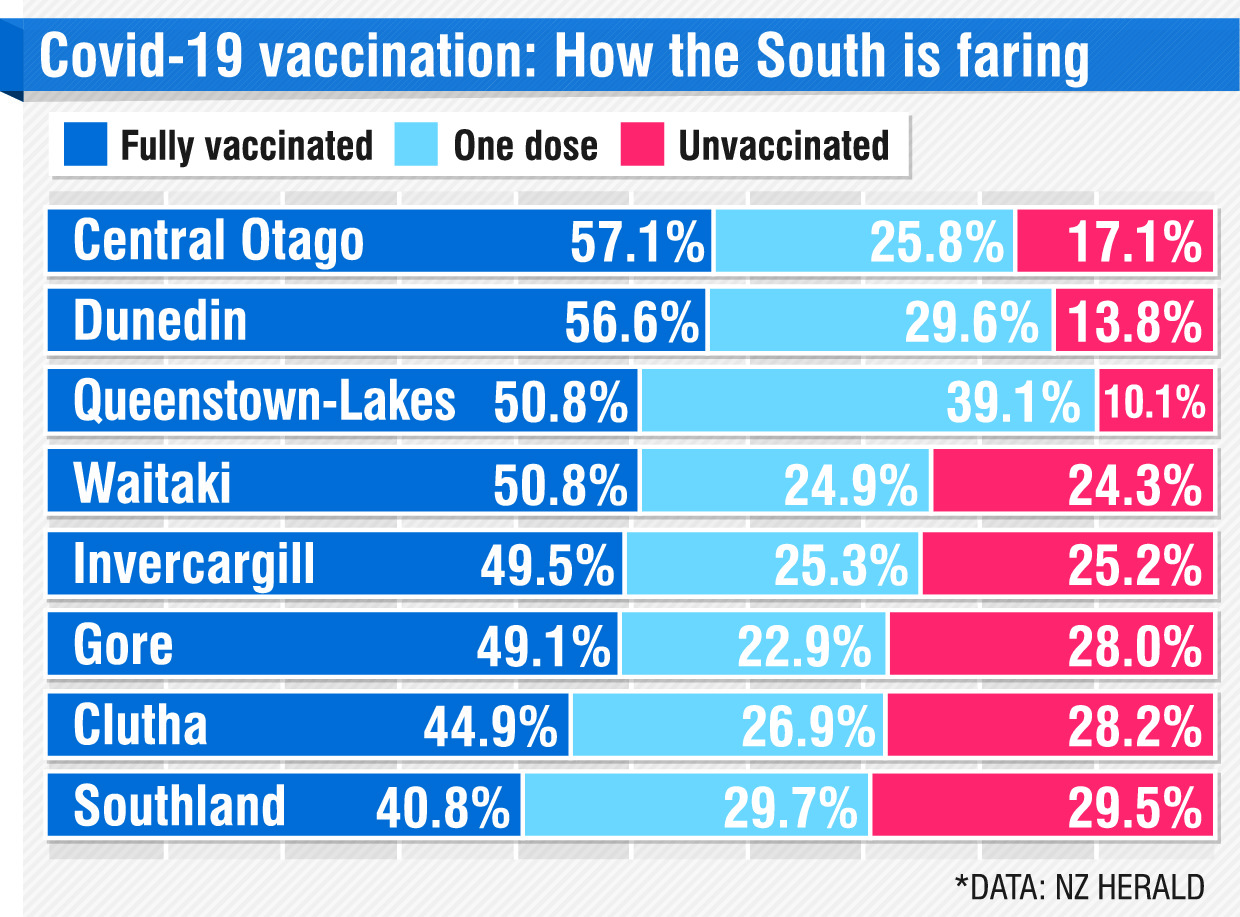 Vaccination rates in the South are among the best in New Zealand for meeting the threat of Covid-19, but a challenge looms in reaching rural areas.

The Queenstown Lakes district is within sight of achieving 90% vaccination, assuming nearly everyone who has received one dose of the Pfizer vaccine goes on to get their second.

It is not the only district in the South making headway.

In the latest breakdown of data from district and city councils, Central Otago is second for the proportion of its eligible population fully vaccinated, just behind Kaikoura.

As of Monday, Central Otago had 57.1% of its eligible population fully vaccinated and Dunedin was among the leaders in fourth, at 56.6%.

Queenstown Lakes was 15th-equal with Waitaki, but just 10.1% of the tourism-oriented district’s eligible population had received no doses of the vaccine — the lowest rate of unvaccinated people in the country.

Queenstown Lakes had a way to go to get nearly everyone fully vaccinated, as 39.1% of the eligible population had received one dose so far.

They grasped the importance of creating the conditions that could enable visitors from places such as Auckland to return, he said.

It was important the momentum continued.

Central Otago Mayor Tim Cadogan said a culture of people looking out for each other had helped his district get vaccination numbers up.

"Everyone’s thinking of neighbours and friends, rather than just themselves,’’ he said.

Dunedin Mayor Aaron Hawkins said it was encouraging vaccination rates were so high in the city, particularly because there had not been community transmission of the virus in the South for a while.

He said he would like to think this came from "the same sense of collective effort and compassion that we see in this city in difficult times’’.

"Before we got too pleased with ourselves, though, I’d want to see how equitably that is spread across the population, by age group or by ethnicity, in particular.’’

The Southland district was 52nd out of 66 for the proportion of the eligible population double-jabbed, at 40.8%.

Southland Mayor Gary Tong was conscious there was work to do to reach into rural areas and a meeting was being held tonight to drive progress.

It was a busy time of year for farmers and growers and access to services was an issue in some areas.

Mobile vaccination centres are expected to be among the solutions.

Clutha Mayor Bryan Cadogan said his district was lagging in several demographics, such as young people vaccinated, and intensive efforts were being made with high schools and major employers.

"Rural areas and harder-to-reach populations will be the strong focus in the coming weeks and months as we work to get to 90% immunisation by the end of the year,’’ he said.

Southern District Health Board clinics had been complemented by general practices, pharmacies and Maori health providers in providing access to the vaccine.

"WellSouth and other providers have also set up pop-up vaccination clinics in areas like Lumsden and Waikawa in eastern Southland — areas where we saw additional support was needed.’’