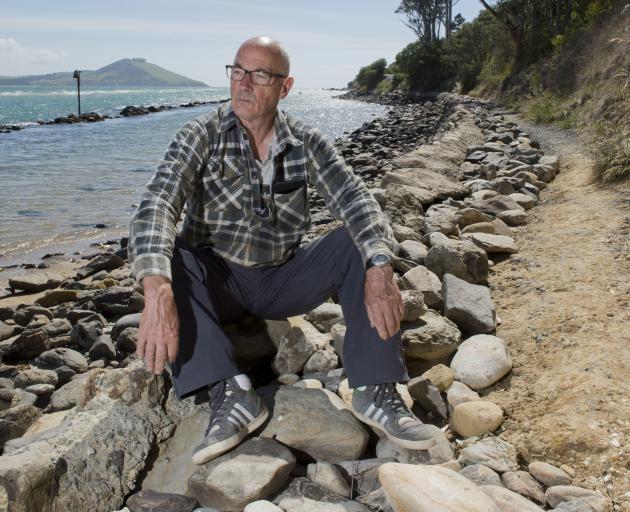 Waikouaiti Coast Community Board member Andy Barratt said there was a major storm surge in September which breached the seawall in several places along the Huriawa Peninsula Walkway, sucking out large amounts of gravel and base material.

While it left a section of the track in a rocky state, too dangerous to walk on, it also exposed a section of sewerage pipeline which runs underneath the track.

He said the council was notified of the damage. Council staff then closed the track and secured the pipeline by pouring a concrete sleeve around it.

However, the contractors did not repair the seawall or the walkway.

Mr Barratt said the board was initially told by the council that it would not accept responsibility for doing any further work on the walkway, arguing the seawall or track did not appear on the council’s "asset register".

Yesterday, council parks and recreation acting group manager Scott MacLean said the track in question was not created by the Dunedin City Council and did not appear on its asset register.

He said there were no plans to add the track to the asset register, but council staff had agreed to support the community by supplying gravel for repairs to the track surface, as had been done before.

"On this occasion, we are happy to support the community to maintain their track, and we appreciate their efforts in providing for those who use it."

Mr Barratt said the community board appreciated the offer of support, but it was only really "a short-term fix".

The walkway was an important asset, used by many locals and visitors, providing peninsula access.

When it had suffered similar less extreme damage the locals took the initiative and made repairs with council-supplied materials.

"This time the damage is far worse. In the board’s view, it requires professional design and remedial work — work which the DCC should undertake.

"To imagine that the pipe is secure if the rest of the wall is just left as it is ... if we have another big [tidal surge] we can’t see how that pipe is properly secure."

He said a local contractor estimated it would cost about $63,000 to replace the rocks and put a capped track on top.

"That is where the matter sits at present. We’re at a bit of a stalemate. Needless to say, the community board is not prepared to let things rest."