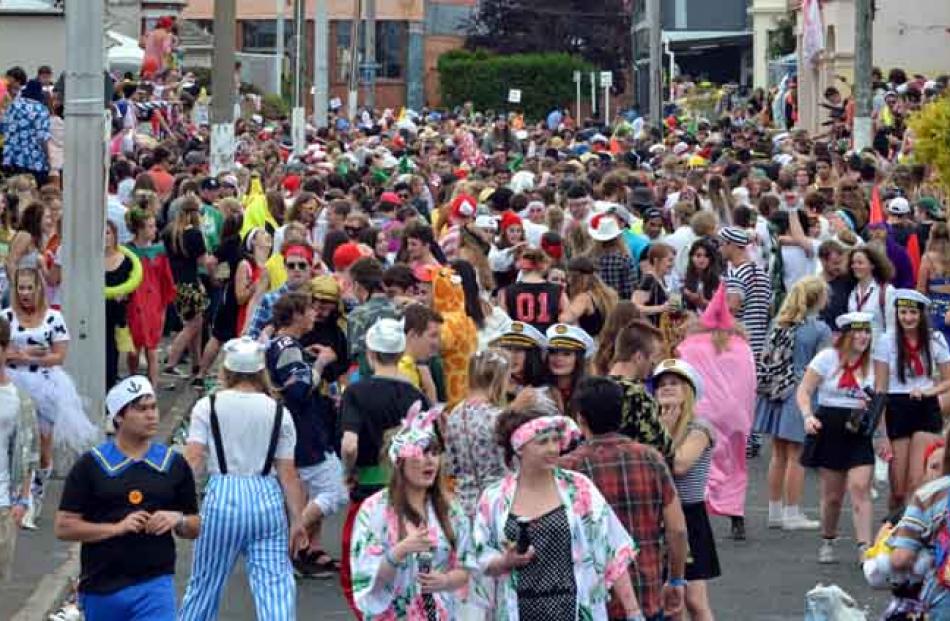 The future of the Hyde St keg party appears safe despite a handful of drunken incidents marring the annual scarfie drinking session.

The Otago University Students' Association held a debriefing on Tuesday with some of the parties involved in planning the event.

''The overall impression of the day was very positive, with particular emphasis on the great communication and liaison between each agency, and the bright and colourful costumes,'' the OUSA said in a statement.

The statement from OUSA said changes would be made to the event in future, but did not include specific details.

''Everyone present was invested in working collaboratively to make improvements to the event, especially in relation to alcohol harm minimisation and health and safety,'' the statement said.

''Moving forward, OUSA is looking to working with all the party stakeholders, to build upon the positive changes over the past few years into the future.''

OUSA took over the planning of the event after fires and student arrests punctuated the 2011 event.

Since then, issues seemed to be fewer, but drunken antics continued to concern.

Dunedin Mayor Dave Cull called a meeting earlier this month of student and tertiary leaders and other invested parties, after furniture fires during O Week.

''If these things continue, someone will be badly hurt or killed,'' he said.

''We all came to the consensus that there are large issues in the North End, but they are mainly safety issues,'' he said, of the meeting.

The meeting resolved to put together a joint statement of intent to try to tackle issues of drinking culture and behaviour in North Dunedin.

Each group would then take steps to address issues specific to them, Mr Cull said.

They would take a ''holistic'' and ''broad community approach'' as problems were not confined only to students.

The groups would decide in coming weeks what steps to take. The 19-year-old student who attacked the St John vehicle is due in the Dunedin District Court today on one charge of wilful damage.