Kiwi take a walk on the wild side 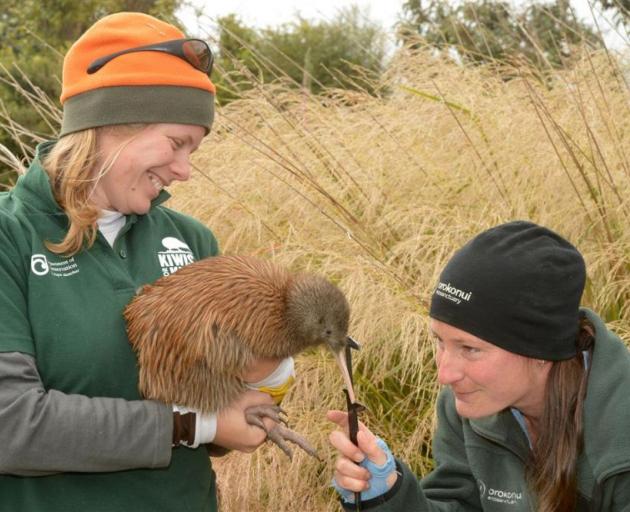 Department of Conservation biodiversity ranger Rose Hanley-Nickolls, of Haast, holds a tokoeka kiwi while Orokonui Ecosanctuary head ranger Kelly Gough, of Dunedin, measures the length of its beak before it was released back into the wild. PHOTO: STEPHEN JAQUIERY

Six tokoeka kiwi have made their way back into the wild and will live free from predators, hopefully producing the next generation.

Four of the kiwi were part of Orokonui Ecosanctuary's ‘‘creche'' for 2014-15 and the other two came from Centre Island but were at Orokonui yesterday on the way to Fiordland.

They had all passed the 1.2kg threshold thought to be optimal for being able to fend off stoats in the wild.

However, these kiwi would probably not have to fend off stoats as they were being rehomed on predator-free Coal Island and Pomona Island.

They were vaccinated and given a general checkup before being flown to Fiordland by helicopter.

Department of Conservation biodiversity ranger Rose Hanley-Nickolls, of Haast, said the checkup would ‘‘give them a head start'' once they were back in the wild.

‘‘There should be a very low disease rate for them on the island,'' she said.

‘‘The only problem they might have is if they run into an adult, as they are quite territorial, or maybe seabirds.''

The mortality rate for kiwi chicks released back into the wild was pretty good, Ms Hanley-Nickolls said.

Orokonui hosted 12 to 15 kiwi chicks a year and it was hoped Doc would go back to Coal Island next year and remove newborn chicks to help improve their rate of survival.

There were about 14,000 tokoeka kiwi in Fiordland and 70,000 kiwi of all species in New Zealand. They are considered ‘‘threatened''.

The released kiwi would not be GPS-tracked, but would be checked regularly by Doc staff.‘‘It's pretty cool [the job],'' Ms Hanley-Nickolls said.

‘‘It's always nice when we see the birds we've been trying to look after all year [get back to the wild].'