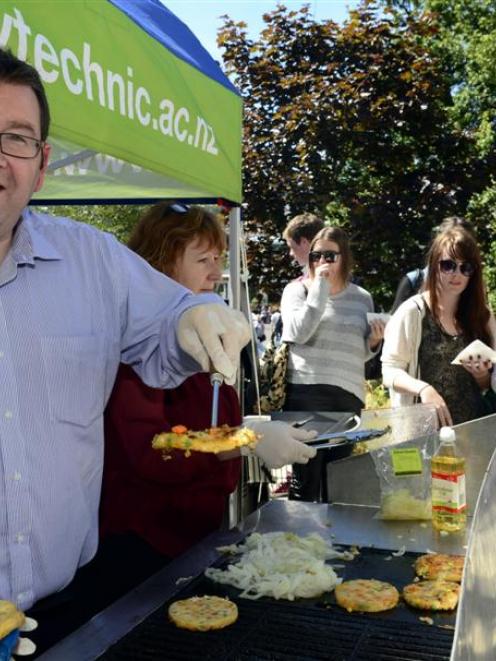 Labour deputy leader and tertiary spokesman Grant Robertson was at Otago Polytechnic as part of the party's Save Our Polytechs campaign.

He met students and staff at the polytechnic, as well as Dunedin Mayor Dave Cull, the Otago Chamber of Commerce and local unions to work out what the region's future skills needs would be.

''We need to sit down and work out what the skills needs are for the community in the next few years so that when we make investments in them [polytechnics], we make the right ones.''

Mr Robertson said the party believed it was important to have a network of polytechnics around the country, and gave a firm promise to try to make it happen.

As part of that commitment, he said the party planned to establish centres of excellence at polytechnics.

''For example, we could consider Otago Polytechnic as a centre of excellence in midwifery.

''It would draw expertise to the institution. The idea is that they would act as a hub for that vocation.''

It was a model which had worked well in the United Kingdom, he said.

Mr Robertson believed the Government's recent decision to cut more than $2 million from Otago Polytechnic's budget was ''crazy'', especially at a time when people were crying out for opportunities and skills.

In 2011, Otago Polytechnic had its government funding reduced by $3.3 million - a 7% drop from the previous year. Twenty staff lost their jobs as a direct result of the funding cuts.

Across the country, more than $50 million was stripped from funding for regional polytechnics in 2011, and last year another $30 million was cut away when foundation courses were handed over to the private sector.

''Otago Polytech is one of the country's top tertiary education providers.

''It does a great job giving young people, and those who want to retrain, the opportunity to get the skills they need to get ahead.''

The need for those opportunities was never greater, given the 100 workers who lost their jobs when Summit Wool Spinners, in Oamaru, closed three weeks ago, and the 90 workers at Hillside rail workshops were made redundant in November.

''Across Otago, 5200 people are unemployed, and last year 1674 people left the province permanently for Australia.

''National's cuts are hurting Otago Polytech, but they are also hurting the region's economy. Kiwis need opportunities, and our economy needs a skilled workforce.

''That's why Labour is committed to strengthening our polytechs.''