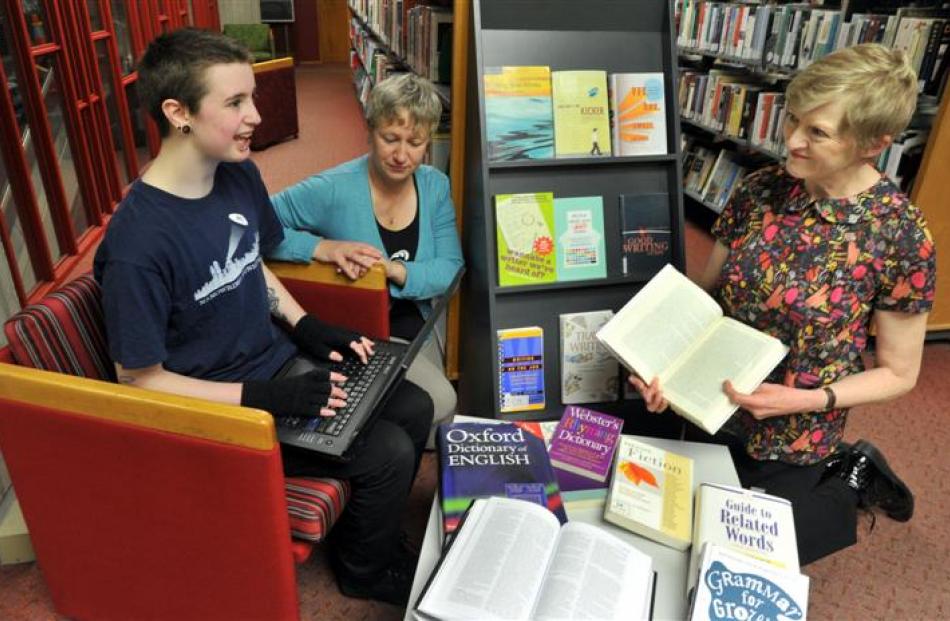 Dunedin writer Rowan Stanley (21) types on a laptop, with literary assistance from librarians Colleen Marshall (left) and Maureen Collins, on the first floor of the Dunedin Public Library. Photo by Craig Baxter.

Starting at midnight tomorrow, Dunedin man Rowan Stanley will try his hand at writing a 50,000-word novel in just one calendar month - again.

The 21-year-old swim and dance instructor has completed the National Novel Writing Month objective of reaching 50,000 words five times already, and ascribes some of that success to Dunedin Public Libraries.

Dunedin Public Libraries marketing co-ordinator Kay Mercer said she was pleased the library could host workshops each Thursday in November, to support local writers who were taking the challenge.

''The library starts careers - it's a springboard,'' she said.

November is National Novel Writing Month, in which writers produce a rough draft of a full novel within a one-month time constraint.

Mr Stanley said 330 writers from Otago and Southland had taken part in the challenge over the past four years.

The library had always been a great help for writers, and he had been using the space with friends long before the workshops became official, he said.

The library was a good place to get together and share ideas with friends, because it turned the often solitary task of writing into a community-oriented one, he said.

In a group, writers could discuss plot elements and metaphors, have ''word wars'' - in which the most words written over a set period wins - and keep track of each other's progress, Mr Stanley said.

Librarian Maureen Collins said a comprehensive range of books would be provided, forming a miniature library for the writers to use.

Mr Stanley said when it came to writing, there were planners, and people who chose to fly by the seat of their pants. He was definitely a planner, and a ''midnight starter'' at that.

Mr Stanley said everybody had a story to tell, whether they knew it or not. Some people who claimed not to be writers would often tell great stories without even realising it, he said.

None of Mr Stanley's novels had been published yet, but the goal was to keep writing for as long as it took.