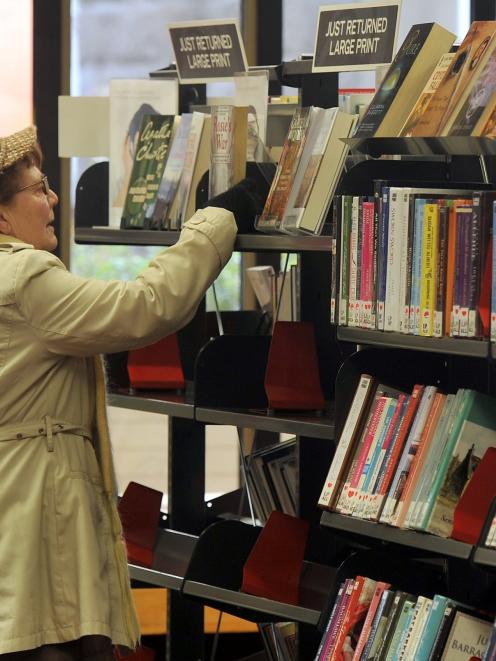 Giselle Steiner, of Dunedin, looks at a book at Dunedin City Library. Photo by Craig Baxter.
Visits and issues at most Otago libraries are declining as readers shift from printed to electronic material.

The downward trends were not unique to Dunedin and were evident at libraries nationwide because people were downloading more library items, resulting in a decline in library issues and visits, Mr Hawke said.

The council had embraced the change and had recently introduced an electronic book collection of about 1600 titles to the catalogue.

''Rather than fighting that trend of electronic usage, we are actually supporting it and we are encouraging people to borrow electronic materials and we are redirecting some resource away from what we would have otherwise spent on printed books to downloadable content and that trend will increase over time,'' Mr Hawke said.

The decrease in physical borrowing would not mean fewer staff were needed, he said.

The council was not concerned about the downward trends and it had not investigated changing any policies or levels of service at the libraries.

''While there are trends for more information being available online, many of our rural communities do not yet have reasonable access to broadband.

''Therefore, for rural communities such as ours, libraries are expected to remain focal points for the community for longer than they might in larger areas.''

The Clutha District Council libraries, with the exception of the Balclutha Library, were in the same building as council service centres, which allowed the council to maintain the library service ''at little extra cost''.

The number of electronic book downloads at the libraries had ''grown phenomenally'', Mr van Zijl said.

Central Otago District Council community services manager Anne Pullar said the fewer number of issues at the Central Otago libraries could be because of electronic books, which had been available since last year.