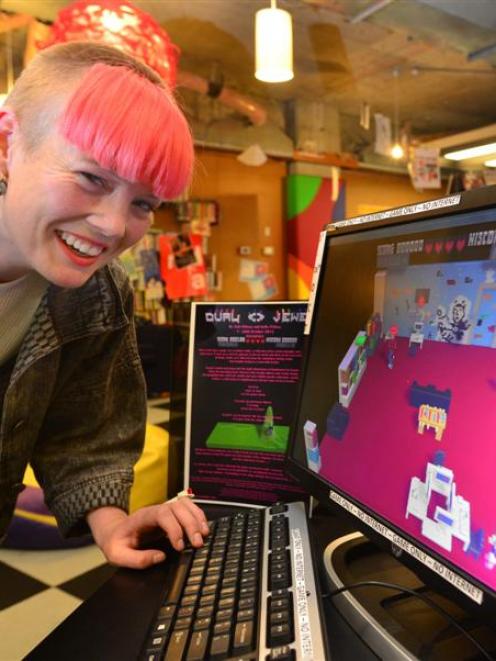 Artist Kelly O'Shea with the portal to her virtual Dunedin, a computer game in the Dunedin Central Library Teen Space. Photo by Peter McIntosh.
A portal into a virtual art world has opened in Dunedin.

The innovative installation, ''Dual-Jewel'', starts as a computer game in the Dunedin Public Library, before taking players on an adventure tour of the city.

''It acts as a sort of gateway to the art world out there in the real world, but looks very different to that, sometimes boring, reality,'' artist and contemporary jeweller Kelly O'Shea said.

''It's not just for people who are predisposed to the arts community. I wanted to explore how open and accessible public galleries are to people who don't usually use them. It's about engaging an alternative community,'' she said.

The computer game was designed by project collaborator Toki Wilson to particularly appeal to teenagers.

The viewer enters the installation as a computer character in the library, before setting off through a virtual Octagon towards the Blue Oyster Project Art Space in Dowling St.

''Dual-Jewel'' is a Blue Oyster Art Space project and is on until October 26.