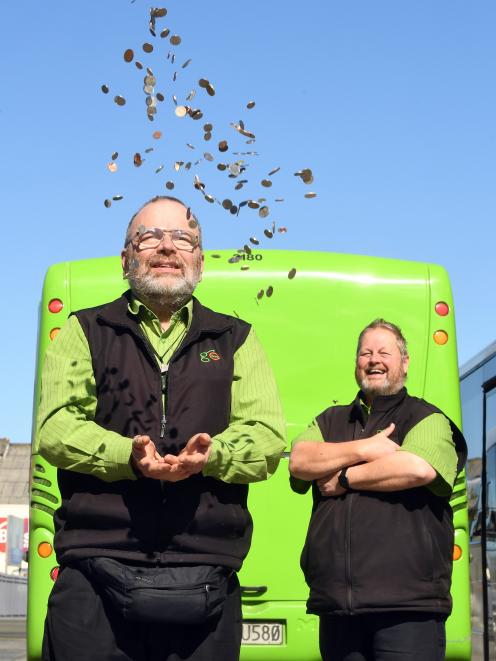 Go Bus drivers Peter Dowden (left) and Philip Matthews celebrate after Go Bus and the Otago Regional Council confirmed drivers are about to be paid the living wage and receive back pay. PHOTO: STEPHEN JAQUIERY
Following one of the longest journeys ever taken by any passenger transport driver, Go Bus drivers will finally receive their long-awaited living wage.

For the past 15 months, the Dunedin Tramways Union has been fighting for the payment.

Yesterday, union president Alan Savell announced Go Bus and the Otago Regional Council had agreed on all contractual details relating to the payment of the living wage and back pay for drivers.

‘‘Go Bus have invoiced the ORC and are awaiting payment.

‘‘We understand the ORC is very keen to complete the transaction.

‘‘The living wage increase in our weekly pay packet will be limited to $22.10 until NZTA [NZ Transport Agency] agree to fully fund it.

Mr Savell said it would have a major impact on the lives of Go Bus drivers.

‘‘Most of our drivers are the main household bread-winners. When they are only bringing home three-quarters of a loaf, they struggle — their whole family struggles.

‘‘The effect that this is going to have on the drivers is absolutely huge.’’

Union member Philip Matthews said it meant he would receive about $2 per hour more than he was getting at present, and it would allow him to make some much needed repairs and renovations to his house.

Go Bus Transport chief operating officer Nigel Piper said it had been a long journey for everyone involved.

‘‘It’s much longer than your average bus trip. It’s been a few lengths of the country, I think.

‘‘We’re very pleased we’ve been able to resolve the outstanding issues and reach agreement so that we can provide a living wage for the drivers.’’

Otago Regional Council transport manager Garry Maloney was pleased the ORC and Go Bus had reached an agreement on driver pay, and bus drivers would receive their back pay ‘‘very soon’’.

‘‘The pay changes now need to be put into practice by ORC generating a purchase order and the operator invoicing ORC in turn.

‘‘ORC are thankful to all of our bus drivers for their hard work and perseverance, keeping our public transport networks running, including as an essential service.’’