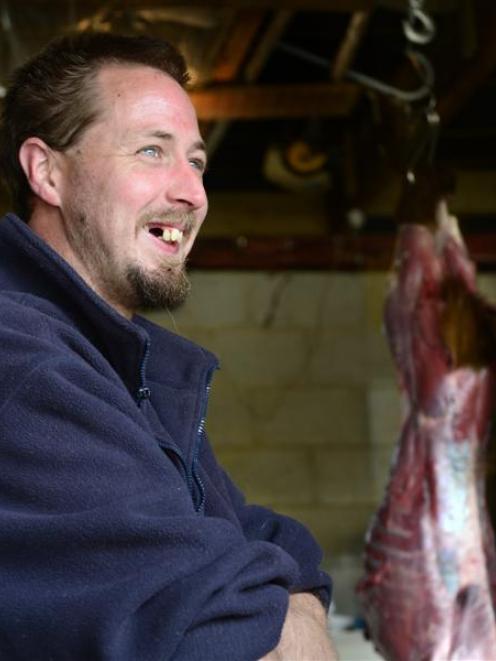 Dunedin bricklayer Douglas McGhie at home yesterday from a pig-hunting expedition after being found by a search and rescue team in a forestry block, near Mosgiel. Photo by Peter McIntosh.
A Dunedin hunter drank puddle water to slake his thirst and snuggled up to his pig dogs to stay warm after getting lost in the rugged Mt Allan area for more than 24 hours.

When Douglas McGhie (31) was found in the Mt Allan forestry block inland from Mosgiel at 9.45pm on Monday, he told the rescue team he was not going to leave without the 23kg wild pig he had carried on his back for about 24 hours before abandoning it nearby.

He came out without the pig, was in hospital by 11pm and was discharged just after midnight, he said.

Yesterday afternoon, he was well enough to skin a 13kg pig from a hunt in Evansdale on Saturday.

Mr McGhie had been hunting on Sunday afternoon with his younger cousin, Quentin McGhie, and his two mates.

At the bottom of the Taieri Gorge trail, the others searched for a missing pig dog, while Mr McGhie carried a 23kg pig towards their vehicle, followed by pig dogs Shadow and Bill, he said.

But a wrong turn had him walking uphill, away from the truck and deeper into the forest block, he said. His cellphone was in the vehicle, the batteries in the dogs' GPS collars were flat and he was cold, wet and lost, he said.

So before nightfall, he burrowed into a hill, huddled with the dogs and covered himself with some "baby pines", he said.

Sitting in the darkness, he heard a 4WD on a nearby track but it was gone before he could react. Later that night, he heard the 4WD again but once again he could not get to it in time.

At dawn on Monday, he walked about 15km, carrying the pig and followed by the dogs, and found a old smoko van used by loggers, slept for an hour and then continued walking until the weather deteriorated, he said. He found some forestry machinery and sheltered in a roller machine for the afternoon with the heater on.

He left the pig behind and walked 10 minutes to a caravan with the dogs. Nearby he found fresh water in a large tank, which was better than the water he had been drinking from puddles, he said.

He huddled with the dogs in the caravan and slept a few hours before being woken by a rescue crew, he said.

"With their lights, and voices and trying to open the door, I was like 'what the hell is that' and a voice said 'Doug, you've been reported missing. Did ya know that?"

He was overwhelmed 90 people had searched for him by foot, 4WD, river, rail and air, he said.

He was thankful his cousin called search and rescue services but was surprised that police asked his cousin if he had accidentally shot Mr McGhie and buried him.

"How dare they ask him that! He's my closest cousin."

Mr McGhie's son Luke McGhie (16) said it had been hard being without him when he was reported lost.

Mr McGhie said he would take a survival kit, food and water on future pig hunts.

He had planned to meet his rescuers next week to thank them in person, he said.