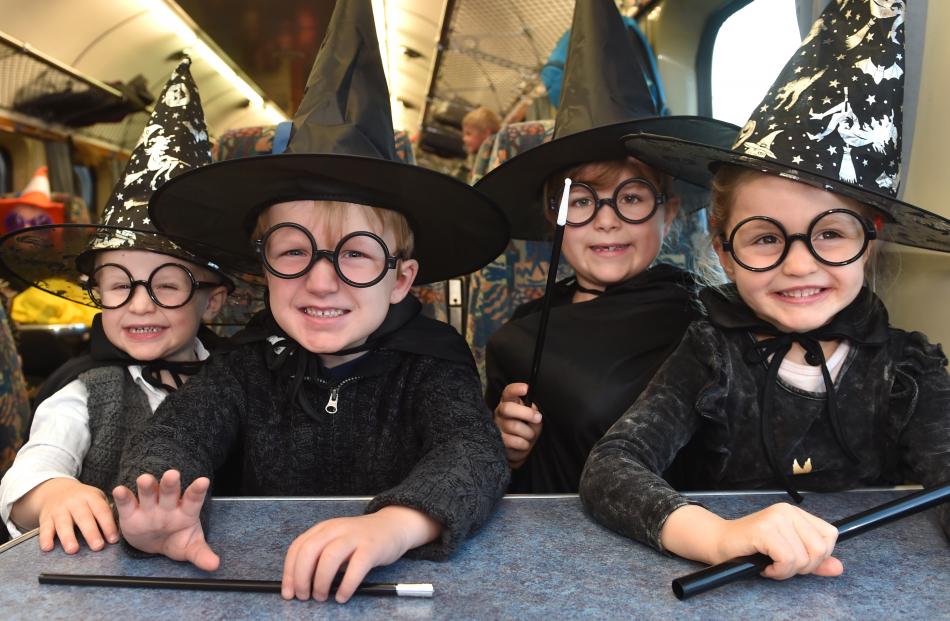 Enjoying a day out on the ODT Enchanted Express yesterday morning are Hogwarts hopefuls (from left) Harry (3), Cameron (4) and Madison Menzies (7), together with Annabell Smith (4), all of Dunedin. Photos: Peter McIntosh 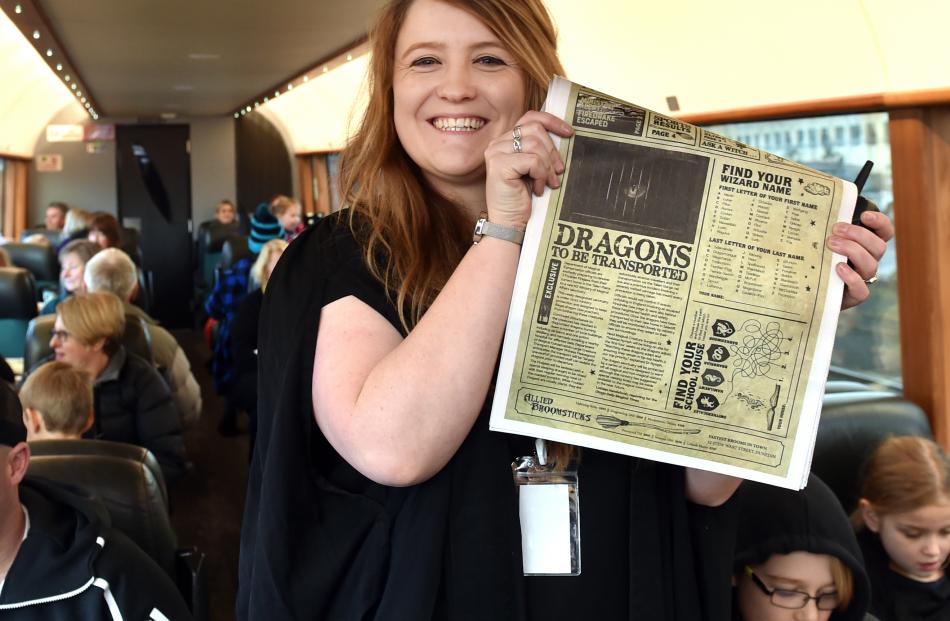 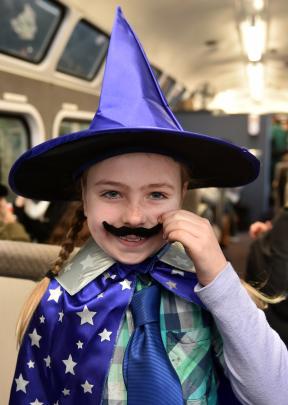 Preparing to cast a spell is Stella Ross (8), of Dunedin. 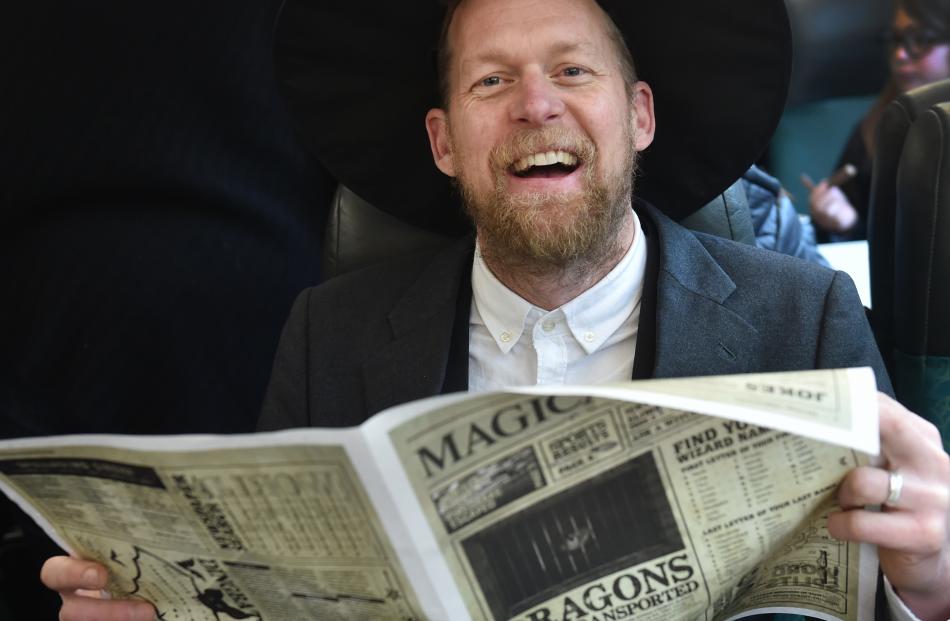 Enjoying a copy of the Otago Daily Magical Times is Rob Foote, of Dunedin. 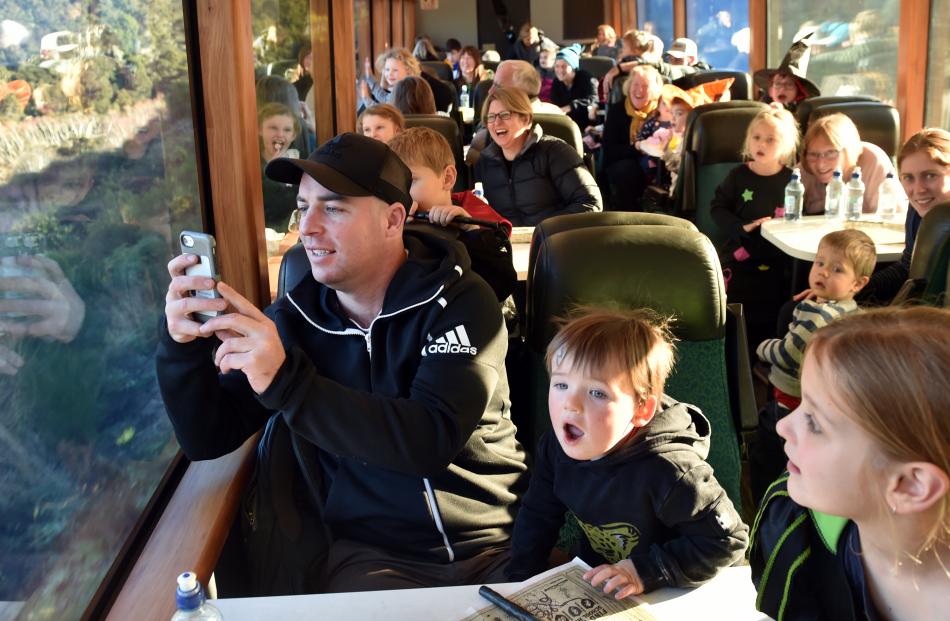 Enraptured by the appearance of broomstick racing champion Aurora Peasegood are Andrew and Freddie (3) Campbell, of Dunedin. 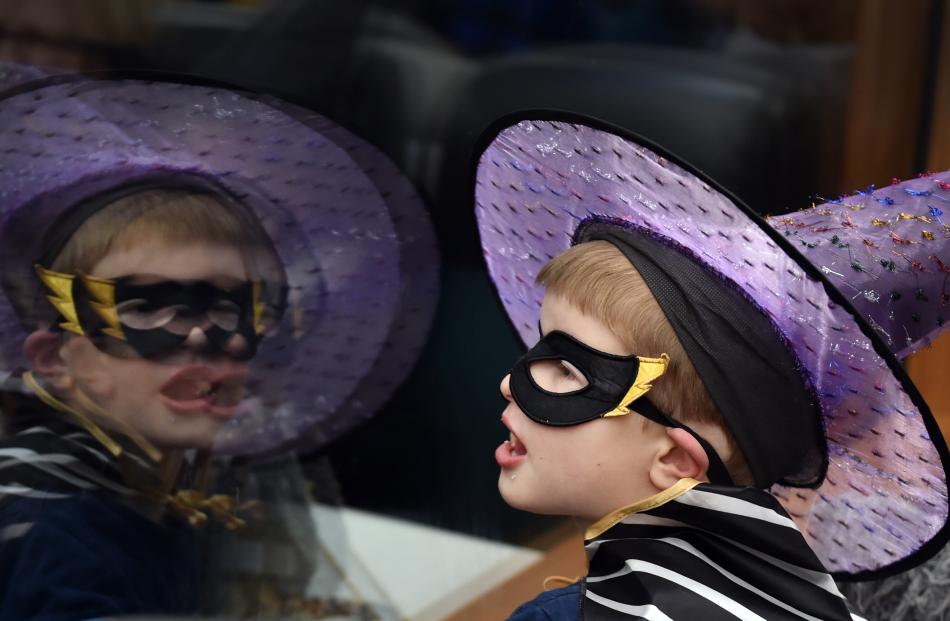 Peering out into darkness after the ODT Enchanted Express plunged into a tunnel is Henry Cartwright (5), of Dunedin. 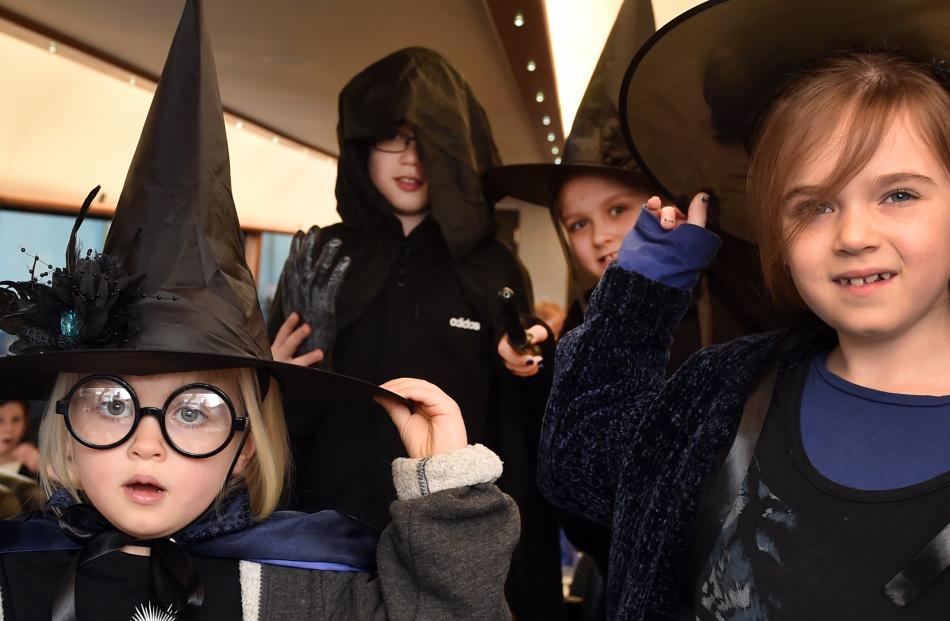 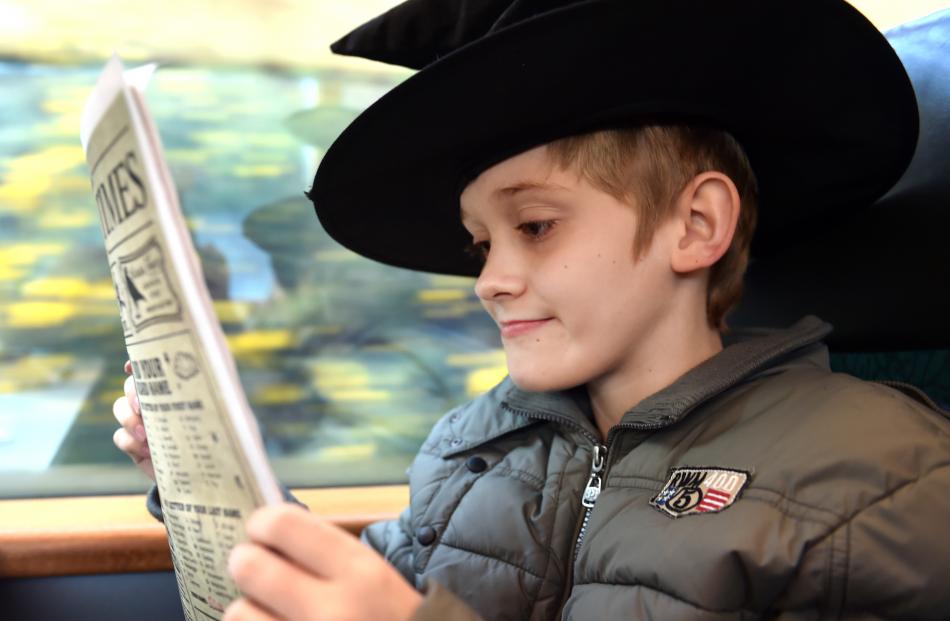 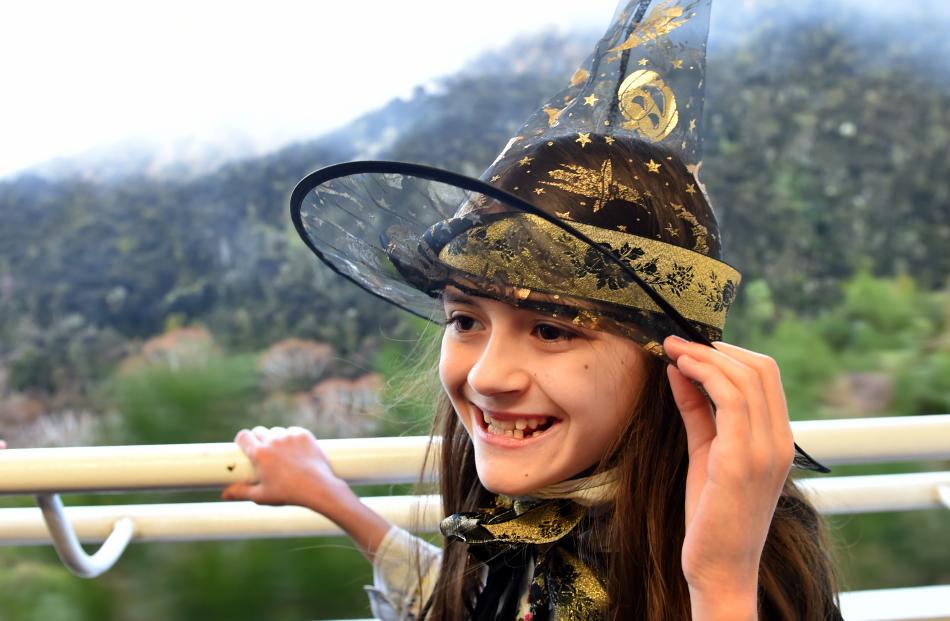 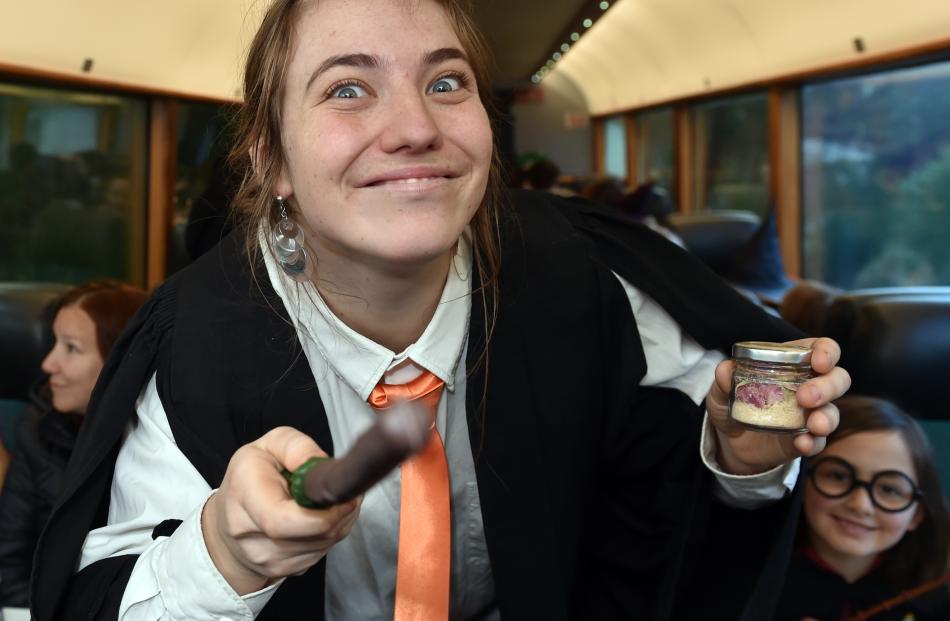 Casting a spell during a break from entertaining children yesterday is Matilda Macandrew, of Dunedin. 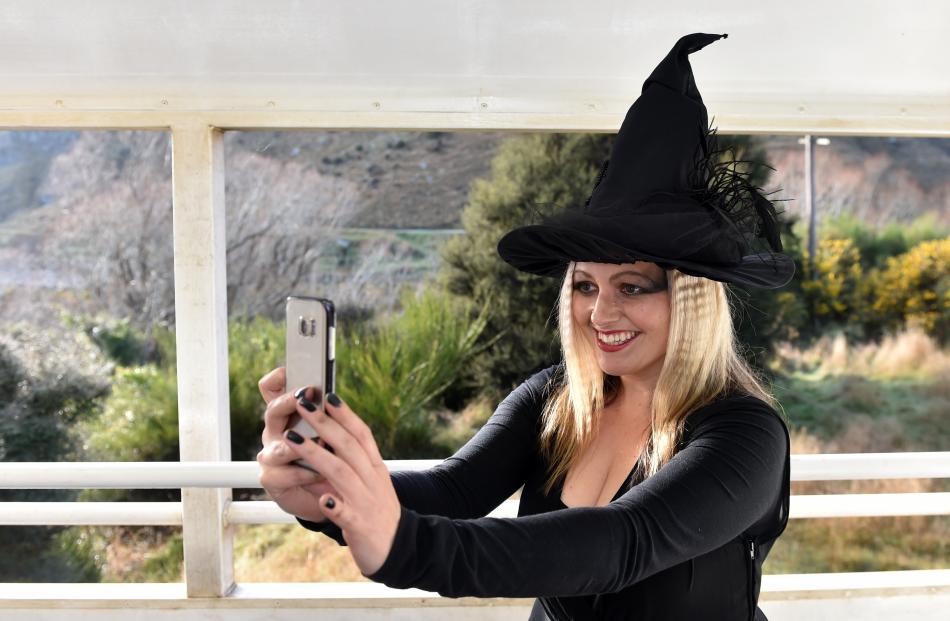 Most magical train journeys packed with young witches and wizards end up at Hogwarts, not Hindon.

But the Otago Daily Times Enchanted Express was no ordinary expedition.

As a brisk dawn broke over the Dunedin Railway Station, hundreds of youngsters and their parents, wearing all manner of magical attire, packed the platform to board the special service.

Complimentary copies of the Otago Daily Magical Times provided to all 345 passengers explained the real purpose of the journey - to re-home three Foulden Firejaw dragons from their current lair on the Taieri Plain to a new Ministry of Magical Affairs sanctuary.

The journey under the hills and on to the Taieri Gorge Railway was an eventful one.

Elves and pixies could be heard when the train plunged into darkness as it flew through the various tunnels.

The lively announcer explained the frost on the farmland was fairy dust, while ponies were unicorns so young they did not yet have horns.

At Hindon, the shocking news broke the dragons had escaped, so the train had to turn around and return to Dunedin, as some reported hearing the frightening noises of the fire-breathers roaring in the distance.

Then, as the train crossed the spectacular Wingatui Viaduct, many gasped at the sight of broomstick racing champion Aurora Peasegood travelling beside the carriages on a training flight, in tandem with a helicopter.

Broomstick champion Aurora Peasegood (aka Lydia Kinsman) flies past the ODT Enchanted Express as it crosses the Wingatui Viaduct. Photos: Peter McIntosh
Her appearance enraptured the young witches and wizards, who pressed themselves against the windows to catch a glimpse of the soaring star.

Charles Reid (10), a Harry Potter fan whose favourite book in the series was the Prisoner of Azkaban, was among those relishing the magical day out on his school holidays.

However, he appeared just as impressed with the stark Strath Taieri scenery as with the show inside the carriages, because when asked about his favourite part of the journey, Charles replied: ''looking outside''.

Back on the platform about noon, Allied Press marketing consultant and festival director Chelsea Hamilton said she had heard from the Department of Magical Conservation all three dragons had been recaptured and they no longer posed a threat to the public.

The outing was spellbinding, she said.

The train ride was one of the main features of the inaugural Enchanted Dunedin Festival which is run by Allied Press and runs until July 21.