Man suffers hunger and weight loss for poverty cause 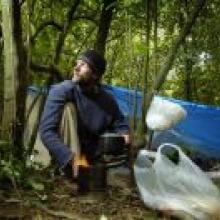 Jolyon White cooks at his bivvy in the Dunedin Town Belt, where he has been living for the past month. Photo by Gerard O'Brien.
A cup of oats and water for breakfast; a cup of rice and lentils for tea; and virtually nothing in between. That is the diet a Dunedin man committed himself to while living for a month on just $1.49 a day.

At the beginning of February, Jolyon White set (34) out to live for a month like the 1.2 billion people in the world who subsist at, or below, the poverty line.

Three weeks down the track, he is hungry all the time, has lost weight and is lacking in energy. But he has survived - after a fashion.

From the shanty he has constructed from rubbish in the town belt, Mr White said he had 80c left from the New Zealand equivalent of $US30 (about $NZ37) at the start of the month.

He had started out with the possessions he thought a person who had lived in poverty all their lives would have - a cooking pot, a tarpaulin, three blankets and the clothes he was wearing.

Mr White said he was not a ‘‘left-leaning hippie'', but a middle-class conservative, a qualified electrician and a climbing instructor who usually lived a ‘‘normal life'', complete with email and cellphone.

He wanted to remind New Zealanders of the eight goals set for the year 2015 by a United Nations summit of world leaders in 2000.

‘‘The first of the eight goals is to halve the number of people living on a dollar a day or less.''

His day consisted of collecting water, cooking on a methylated spirits stove he fashioned from discarded food cans and wandering to relieve boredom.

He washed in the fountain in the Octagon or at the Speight's tap in Rattray St, kept an eye out for wild plum, apple and pear trees, collected useful rubbish and had just acquired a rotten mattress.

At the start of the month, he scavenged food from supermarket rubbish skips, but found their supply of fresh bread, fresh salads, yoghurt and camembert cheese negated the point of the exercise.

For the first few nights, he tried to sleep in alleyways around Great King St, but found he was too often disturbed by drunks, so moved to a secluded part of the town belt where the only night noises were snuffling hedgehogs.

Rain last Friday turned his camp cold and soggy, reminding him how hard it could be to live exposed to the elements.

Mr White believed NZ's clean water and lack of disease and civil war made living in poverty here easier than in many other countries.

He had rejected all help, but friends checked on him twice a week. To mark the end of the month's poverty, Mr White planned to join friends at a restaurant for a glass of wine and real fruit ice cream.