Police concluded Mr McLean had been crushed by his 1994 Toyota Land Cruiser as he tried to stop it from rolling backwards down a slope.

Evidence at yesterday's inquest centred on whether the vehicle, with a 1000-litre spray tank on the back, was overloaded at the time.

It appeared Mr McLean, of Mosgiel, left the vehicle idling, in neutral, with the handbrake on, when he stopped to open a fence on a steep rural track, and when the ute started to roll backwards, he tried to stop it or steer it towards an embankment.

Mr Rapley said the ute, on such a slope, should have been placed in low gear with the handbrake applied, the wheels turned towards the bank and the engine off.

The vehicle had a gross vehicle weight, set by the manufacturer, of 3050kg.

With no spray in the tank, and no-one inside, it weighed 2740kg.

That meant the vehicle became overloaded when the spray tank was less than a third full.

Mr Rapley said it was commonplace in the industry for vehicles to be used while overloaded.

''I think you would probably find that every spray company in New Zealand, or about 90% of them, have overweight vehicles when the tanks are fully loaded. I don't trust handbrakes, full stop. I've had a close scare myself,'' he said.

Mr McLean was an experienced driver and sprayer, and had used the Toyota as an employee of Otago Spraying Ltd before he bought the business and the vehicle from Mr Rapley.

The Toyota was warranted and found to be in good working order by investigators for the New Zealand Transport Agency and WorkSafe New Zealand on behalf of the Ministry of Business, Innovation and Employment.

Mr Verwey estimated the spray tank had between 100 and 150 litres of chemical inside it when the truck rolled, although Mr Rapley estimated it had up to 300 litres inside it at the time, based on the amount spilled.

There were no breaches of the Health and Safety in Employment Act 1992 by any party, Mr Verwey said.

Coroner Richard McElrea, of Christchurch, reserved his decision, to be released in written findings. 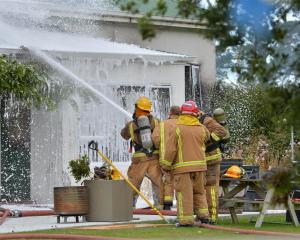