0 Comments
The largely lost music venues at the heart of the Dunedin Sound are being charted by a man at the centre of it all.

The Bats and The Clean bass guitarist and vocalist Robert Scott is also a painter, and in his capacity as the latter he is painting a massive map at the Hocken Library featuring paintings of some of the venues where the music of bands which recorded with record label Flying Nun came to life.

The mural will be the centrepiece for the upcoming exhibition ‘‘Kaleidoscope World: 40 years of Flying Nun in Dunedin’’.

Venues featured in the artwork, called Where they played, will include The Empire Tavern, The Pitz, Chippendale House, the Beneficiaries Hall, The Crown Hotel and the Captain Cook Hotel.

Many of the venues have been shut down, knocked down or replaced since their heyday. 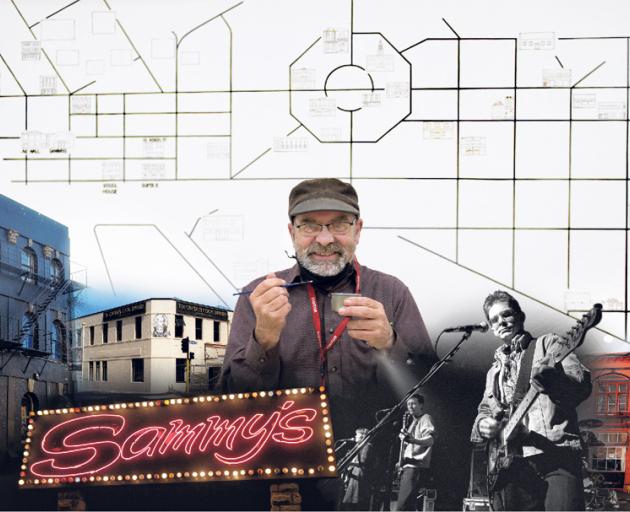 Musician and artist Robert Scott has started painting a mural mapping Flying Nun venues in Dunedin, for an upcoming exhibition at the Hocken Library. The map will include the Empire Tavern, Sammy’s, the Captain Cook Hotel and The Provincial. Also pictured: Scott performs with The Bats at Sammy’s in the 1990s. PHOTO: GERARD O’BRIEN

The exhibition will celebrate Flying Nun’s 40th anniversary, and tell stories of Dunedin musicians and scenes involved with the label since its creation in 1981.

Scott said he should have the mural finished by Friday.

Flying Nun was started by Roger Shepherd and is heavily associated with early 1980s Dunedin music.

The record label became the heart of the ‘‘Dunedin Sound’’, promoting bands such as The Chills, The Bats and The Clean.

Hocken music curator Amanda Mills said the display was truly for Dunedin people and about Dunedin experiences, despite the label’s beginning in Christchurch.

‘‘The exhibition is really rooted in Dunedin.’’

Musician and artist Robert Scott has started painting a mural mapping Flying Nun venues in Dunedin, for an upcoming exhibition at the Hocken Library. The map will include the Empire Tavern, Sammy’s, the Captain Cook Hotel and The Provincial. Also pictured: Scott performs with The Bats at Sammy’s in the 1990s. PHOTO: GERARD O’BRIEN

Ephemera curator Katherine Milburn said the mural would hopefully add a ‘‘wow factor’’ upon entry to the exhibition.

The curators hoped people would resonate with all parts of the display, which would feature Hocken Collection items such as records and posters, artworks and video clips, and a few ‘‘special items’’ contributed by musicians.

The exhibition will run at the Hocken Library from November 27 until March next year.