By Grant Miller
0 Comments
Crowds flocked to Matariki events across the South, as they embraced New Zealand’s new public holiday.

The Mana Moana: Otepoti water and light show made its debut in Dunedin under clear skies at Otago Harbour yesterday evening. It will run for two more nights.

The event, funded by the Dunedin City Council, brought together the work of Maori and Pasifika artists through images, film, poems and dance, all projected on to a water screen.

More than 2000 people tuned in on the first night. 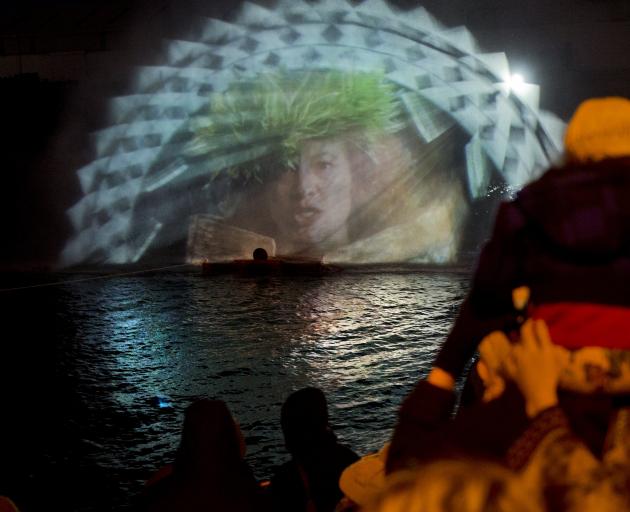 Imagery was also prominent at the start of the day, when hundreds of people gathered at Tuhura Otago Museum in Dunedin to celebrate Matariki and to pay tribute to loved ones who died in the past year. Images people were invited to send in were screened on a wall by the museum entrance.

Matariki signals the start of the Maori New Year and it is considered a time of renewal and celebration that begins with the rising of the Matariki star cluster.

It was "a meaningful step forward in understanding what makes us unique as a country, and what holds us together as a nation.

The dawn ceremony in Dunedin included a time for people to call out the names of loved ones who had died.

Customhouse Quay on the Otago Harbour waterfront was packed last night for first night of the Matariki immersive show. PHOTO: GERARD O’BRIEN
Debbie Bishop, of Dunedin, was one person who did, calling out the name of her late husband, Prof Phil Bishop, who died in January last year.

"For me, it’s a new beginning, Mrs Bishop said.

Prof Bishop, from the University of Otago, was at the forefront of amphibian conservation biology.

Simon Noble, of Dunedin, said the holiday was an important piece of nation-building infrastructure.

Among the images displayed at the museum was one of his sister, Christina Noble, who died in March.

Otakou mana whenua representative Tumai Cassidy described a celestial canoe, with Puaka at the back and Matariki at the front.

The canoe captain was Taramainuku and he trawled through the sky, scooping up with his net loved ones who had died, Mr Cassidy said.

He viewed the Matariki holiday as an occasion genuinely grounded in New Zealand, and an opportunity for citizens to show their appreciation for the wider environment.

PHOTO: GERARD O’BRIEN
Joe Hunter, of Dunedin, said, as a pakeha, she appreciated the hospitality of mana whenua.

She described herself as a language learner and said it was wonderful to see the Maori language at front and centre of celebrations.

Learning te reo had been a slow journey for her, but she appreciated the richness of the language.

Dunedin Mayor Aaron Hawkins said it was a privilege to stand together on the occasion, at the same time as acknowledging "generations of people who went before us.

Mr Hawkins said it had been humbling to see growth and depth of understanding about Matariki develop.

Otakou kaumatua Edward Ellison said that Matariki was a time of celebration, a time fpr feasting, reflection and for the sharing of stories.

It was also a time for planning ahead, he said.

Mr Ellison said the longest night of the year was traditionally the occasion when people had camped together in the Pacific.

It was exciting to see Matariki now being acknowledged as a public holiday, he said.

It was a day that was accessible to all New Zealanders, Mr Ellison said.