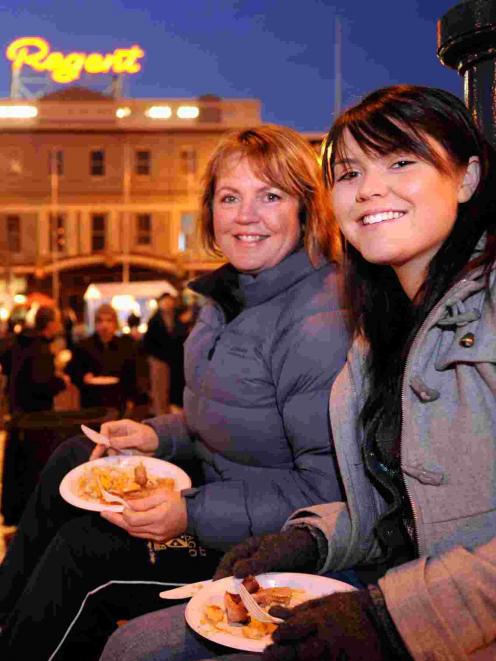 Mother and daughter Heather Brown (left) and Claire Newton shared a midwinter breakfast in the Octagon yesterday morning before the food ran out. Photo by Stephen Jaquiery.
Half a sack of porridge was the only thing left to eat at the Mayor's Midwinter Breakfast by 8am yesterday after the largest turnout in its five-year history.

Dunedin City Council events team leader Marilyn Anderson said it was unexpected but she was delighted with the response from the community.

The event raised more than $1750 for the Mayor's Community Can Help Food Bank Appeal and would be donated to the city's four major food banks.

"This is the fifth one we've done and it's by far the most successful.

''We have more than doubled the amount we made last year.

''This year's tally is a record.

For Bill Mattson (78) and Vic Bridgman (63), of Dunedin - who were munching on the last of the bacon and beans - the event was not just about the breakfast.

"The tucker's pretty good, but the scenery was better," Mr Mattson said.

"Vic and I have been coming here every year since it started.

''It's beautiful sitting in the dark watching the sun come up."

Dunedin Mayor Peter Chin was delighted with the turnout and believed the success was due to a combination of the good weather and public awareness of the shortage of stock at Dunedin's food banks.

Presbyterian Support chief executive Gillian Bremner said the donation was well-timed as the shelves at the organisation's food bank had been emptying quickly.

It was an issue affecting all of Dunedin's food banks and since their plight was raised in the Otago Daily Times, Presbyterian Support had received more than $3000.

Food banks would continue to face increased demand, she said.