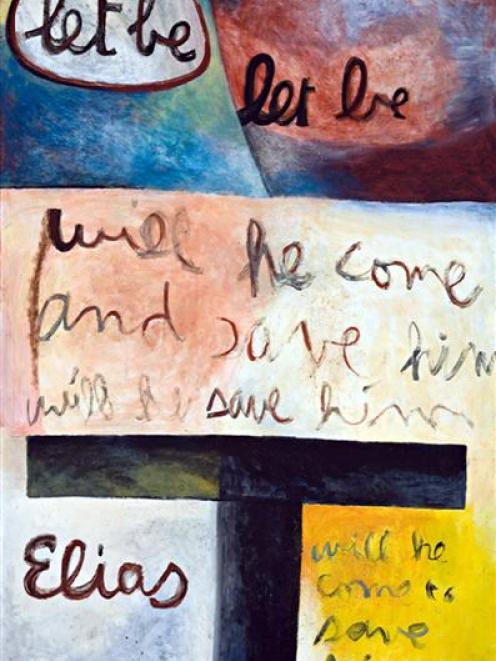 Let be, Let be by Colin McCahon. Photo by Deutscher and Hackett Gallery.
A 1959 work by the late New Zealand artist, Colin McCahon, has sold for a record auction price in Melbourne.

Let be, Let be sold at the Deutscher and Hackett Gallery on Wednesday for $A942,000 ($NZ1,144,832), including buyer's premium, to prominent Auckland dealer John Gow, a founding director of the Gow Langsford Gallery.

"It's the highest price at auction for a work by a New Zealand artist," Mr Gow said from Melbourne yesterday.

"I had a client who was very interested in it.

"And now it's coming back home to New Zealand."

The buyer was not from Otago, he said.

The work had been in a private Australian collection for the past 10 years.

McCahon is the only New Zealand artist to have commanded more than $1 million for his works.

"There have been about four or five McCahons go for over a million [dollars], but this is the highest auction price," Mr Gow said.

Let be, Let be had an estimated price before the auction of $A800,000 to $A1.2 million, a low estimate, according to industry observers.

"[It's a] brilliant period and that low estimate on it is going to cause quite an excitement, because a lot of people will think they've got a chance at it."

The enamel and sand on board work was painted by McCahon in 1959 as part of his "Elias" series.

It is considered one of the most important examples of McCahon's "word paintings".

McCahon considered the "Elias" series a reaction against the domination of his painting by purely landscape concerns.

The paintings were also viewed as a period during which the artist was more concerned with the meaning of life than of art.

"The works with text on are the kinds of works that McCahon is renowned for beyond New Zealand.

Browne, the nephew of Middlemarch artist Patricia Bosshard-Browne, co-wrote a book on McCahon, A Question of Faith.