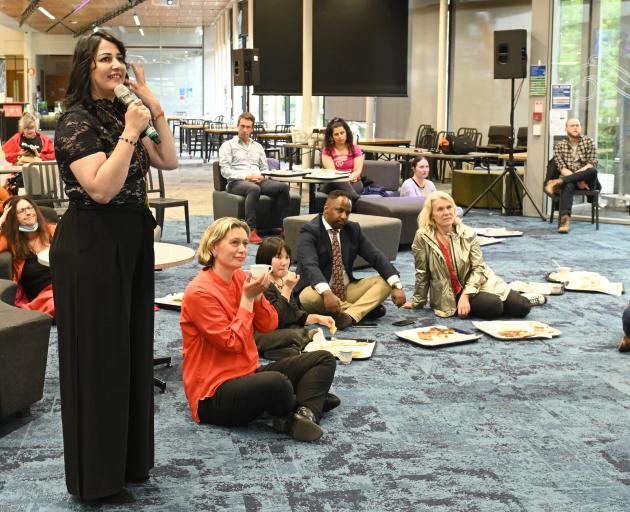 A Dunedin audience, through translator Zhian Eli (standing), shares breakfast with a family of Kurdish refugees, linked via Zoom from a camp in northern Iraq. PHOTO: LINDA ROBERTSON
Half past seven is a reasonable time for breakfast, but at 7.30pm yesterday a Dunedin gathering had a breakfast with a difference, joining a group of Kurdish refugees via video link to share a meal.

The Kurds, living in a camp in northern Iraq, agreed to the unusual Zoom meal to educate their far-distant audience about what life is like in a refugee camp.

For one special guest, Labour list MP Ibrahim Omer, the experience was all too familiar.

Eritrean-born, he fled to Sudan as a teenager and worked as an interpreter at a camp until moving to New Zealand as a refugee in 2008.

‘‘When Ingrid (Leary, Taieri MP for Labour) told me about this event I don’t think we even discussed it. I said I would come,’’ he said.

‘‘I have gone on to live this amazing life ... the message of hope that we send could change the lives of these people and maybe save their lives.’’

A global educational mentoring app, Learn2Earn connects volunteer tutors from around the world to refugees, both for friendship and to learn new skills.

‘‘Refugees have stories of war, hunger, torture, rape, killings, and collectively as human beings we can help these people to have a better life,’’ Mr Omer said.

‘‘The message we are sending from the bottom of the South Island to those refugees is one of hope, that thousands of miles away people are thinking of them.’’