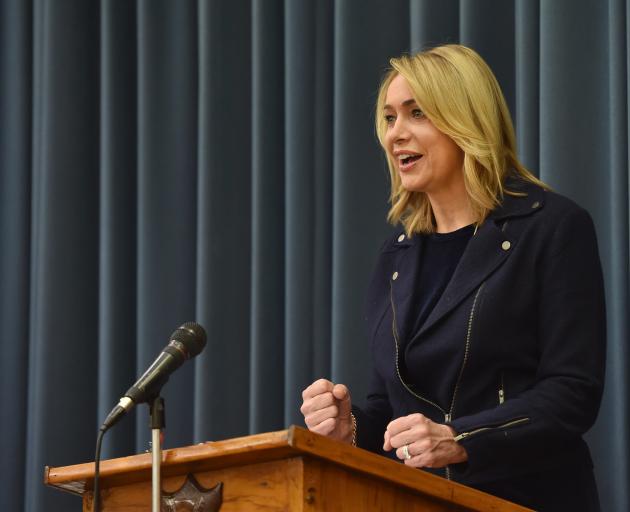 Alison Mau, broadcaster and leader of the #MeTooNZ campaign , discusses her work at last night's Dame Dorothy Fraser Lecture at the Burns Hall in Dunedin.
The head of the #MeTooNZ investigation wants a national inquiry to drag workplace sexual harassment into the sunlight.

Broadcaster Alison Mau, who has been heading the national campaign since launching it in February, was commenting while giving the seventh annual Dame Dorothy Fraser Lecture in Dunedin last night.

Ms Mau told a crowd of about 100 people the campaign had already heard hundreds of stories of workplace sexual harassment from across the country, often ``painfully similar''.

Most women did not want to be named, fearing career repercussions, or even to have their stories told, but were relieved ``just to have someone to talk to'', she said.

Six women had so far been referred to police to make formal complaints, including one allegation of rape, she said.

More stories would follow, but complaints already covered a wide cross-section of the private and public sectors, including some of New Zealand's largest companies.

A crowd of nearly 100 attended the lecture. PHOTO: PETER MCINTOSH
One common theme was the inability of complainants to obtain even a ``sincere apology'', forcing women to quit or endure a formal complaints process that could be ``far more damaging'' than the original offence.

That underscored the need for an inquiry, which she hoped politicians, the Human Rights Commission and even WorkSafe would embrace.

``I think it's an issue we can't tackle properly unless we know the size of it.''

The campaign had drawn some ``abusive'' comments and criticism, including from broadcaster Mike Hosking, who labelled it ``tacky, tabloid'' journalism.

But Ms Mau said sexual harassment occurred on a spectrum, from ``bum pinching'' to rape, and other men supported the movement.

Asked what advice she had for other males, Ms Mau said they should keep their eyes open and try to help if they could.

``There are a lot of men who do feel threatened by the kinds of things we are saying ... because they think, erroneously, that we are blaming all of you. Not true at all.''