By Andrew Marshall
0 Comments
A set of moa bones due to be auctioned in Dunedin this Sunday could be one of the last sold in the country if a law change is successful.

Proctor Auctions is holding a taxidermy auction and the skeleton of a male heavy-footed moa will be one of the prize lots.

Selling moa bones domestically is legal but new regulations under the Wildlife Act are being considered by the Government.

The regulations would make it illegal to sell or trade parts of extinct native animals, such as bones, eggshells and feathers.

Proctor Auctions salesman Jordan Proctor said the possible new regulations meant the skeleton might be the last one the firm sells, having sold another set of bones last month.

Selling a set of moa bones was usually a once-in-a-lifetime occurrence, he said.

"To have two in a month is very special." 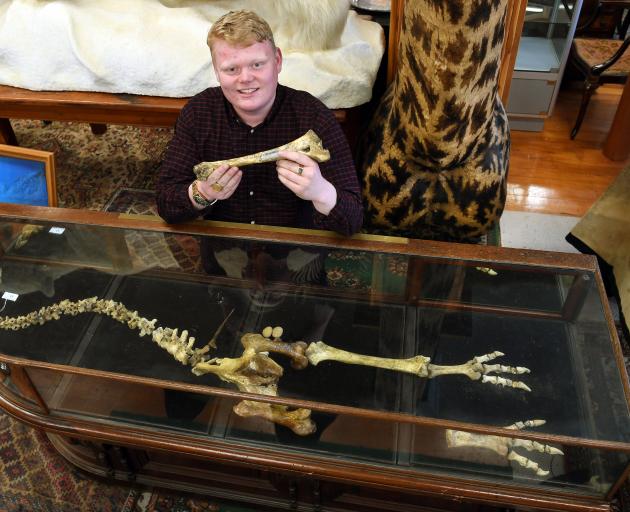 Proctor Auctions salesman Jordan Proctor holds the thigh bone of a moa skeleton due to be auctioned this Sunday. PHOTO: STEPHEN JAQUIERY

Removing the ability to sell the parts would discourage their theft, Ms Burns said.

On top of raiding sites for the remains, thieves were also "trampling over a whole lot of other evidence ... which is super important for understanding past species".

Museums had lobbied for new regulations to be introduced quickly and until they were there was likely to be a flurry of sales.

"It will cause people who have got private collections to start thinking of moving them on."

Mr Proctor said Sunday’s auction was made up of pieces from four separate private collections.

Sale prices for taxidermied specimens were "going through the roof", he said.

The moa skeleton, found in the Takaka region, had attracted a pre-auction bid of $29,000.

A Christchurch bidder paid $44,000 for the bones sold the previous month.

Other curiosities for sale this weekend include a large stuffed polar bear, a mounted giraffe head and neck, and a walking stick made from a whale’s penis.