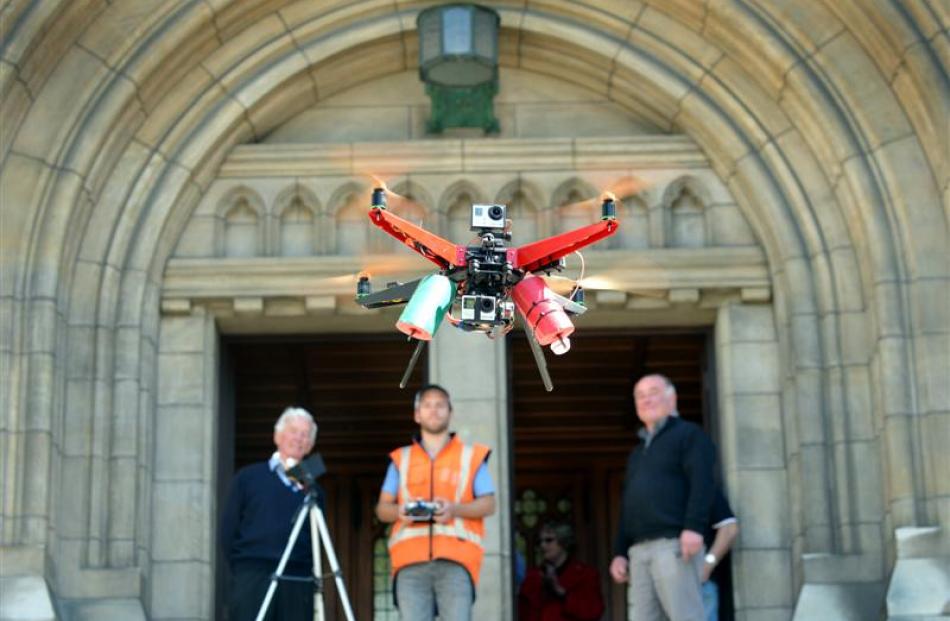 An unmanned aircraft investigating the upper reaches of St Paul's Cathedral captivated office workers in a nearby high-rise building yesterday.

''It assesses the building and reveals what is going on.''

The drone was an easier, safer and cheaper alternative to erecting scaffolding to have a person investigate the area.

He directed it with a remote control and watched live images on a monitor on the ground.

From the captured images, he could zoom in and view hair-line cracks in buildings, he said.

After checking the exterior of St Paul's Cathedral yesterday, Mr Owen would conduct an interior inspection next week.

Despite the wind affecting the flight path, he navigated confidently near stained-glass windows yesterday.

''I am cautious though, if I feel I'm getting pushed towards it, and it is a bit more than I can compensate for, then I fly away and land.

''There's no need for me to push things - stained-glass windows are valuable.''

When the drone hovered around the church yesterday, workers in Forsyth Barr House lined the windows to watch.

Cathedral works committee chairman David Tucker said the building needed ''seismic strengthening'' analysis and the drone was being used to complete a ''major part'' of the inspection work.

The first inspections revealed the church had ''just scraped in'' to acceptable standard levels, he said.

However, the cathedral would need to pass more stringent testing in the future so strengthening work had begun.

The charity had aspirations to evaluate footage in Dunedin from locations across New Zealand so having access to ultra-fast broadband would be important.

''We are really hot on Gigatown because we are going to try to move quite large volumes of pictures around.''

Cameras on board: A GoPro Hero4, high-definition camera in a gimbal and a fixed GoPro Hero3+ as a back-up camera.