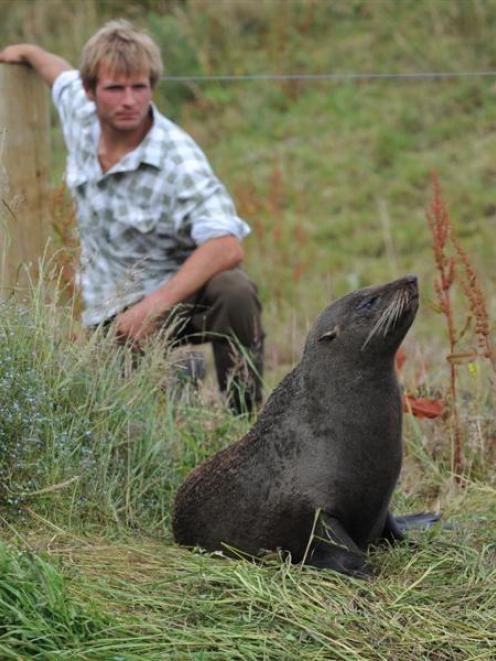 Taieri farmer Matt Kerr with the roaming fur seal. Photo by Peter McIntosh.
A renegade seal had the cattle rustling on the Taieri yesterday.

The New Zealand fur seal was spotted about lunchtime on a Maungatua Rd farm, near Berwick.

"One of our workers gave me a call and said the cows were acting a bit funny, so I went to have a look and there was a seal sitting there," Taieri farmer Matt Kerr said yesterday.

"He barked at me a couple of times, but seemed fine apart from that."

The seal appeared to have travelled 15km inland along a contour channel to the farm, Mr Kerr said.

"He's certainly a long way away from home. It's not very deep in that channel. It's part of the flood system that was built to take the excess water off the Maungatuas. It's only half a foot wide in places and only a few centimetres deep. In other places it's just mud."

Mr Kerr's father, Alistair, has owned the Maungatua Rd farm for 25 years and said he had "never seen anything like it".

"It looks like he's swum up the Taieri River into Waihola and Waipori and then up the contour channel.

"I suppose he's already eaten all the fish in there. I'm a diver, so I'm not really a big fan of seals."

Department of Conservation coastal ranger Jim Fyfe said the seal looked "happy and healthy" and was probably aged about 3 or 4.

"We've had a couple of calls about it and we've been monitoring it for the last few days. It looks like he's followed the river up and, hopefully, he'll be able to follow it back down again," he said last night.

"It's not uncommon to get seal sightings in the Waipori or Lake Waihola every few years. There's a tidal influence and seals and sea lions were designed to explore waterways."

Anyone who sights a fur seal or sea lion in an unusual location is asked to contact Doc on 0800 DOC HOT.