More than you can bare? 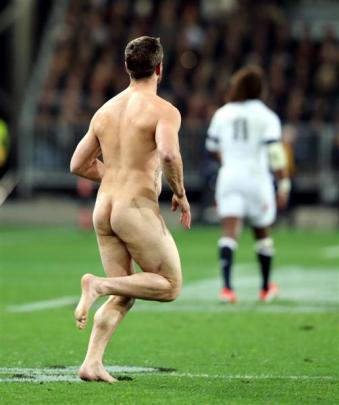 Adam Holtslag runs naked before being tackled by a security guard at the All Blacks v England test in Dunedin last weekend. Photo by Stephen Jaquiery. 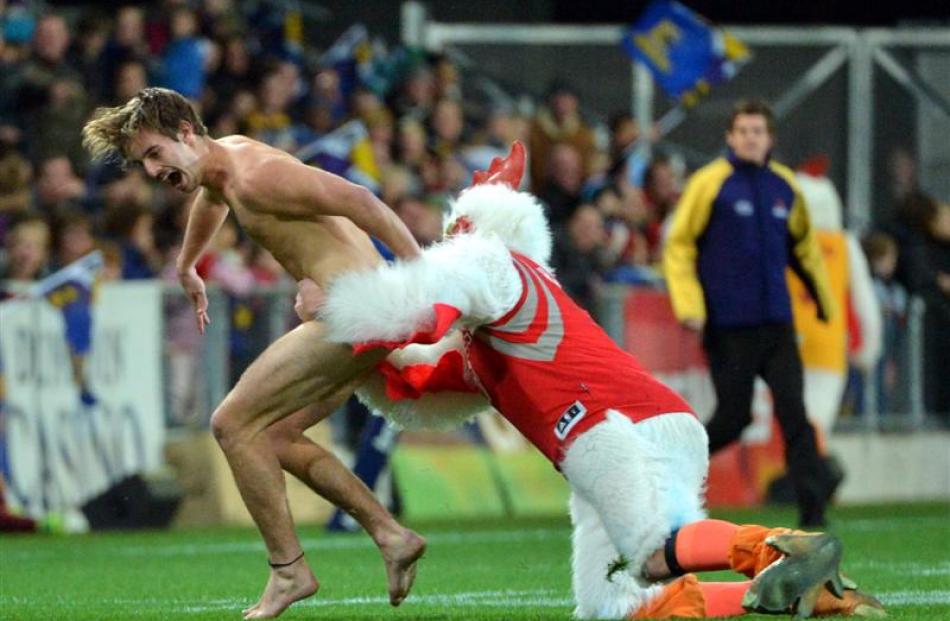 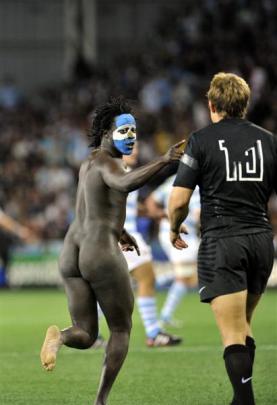 Streaking is the issue which has hit headlines globally and divided opinion nationally this week. Timothy Brown searches for the naked truth.

It was the tackle which was felt around the world.

More than 1 million You Tube viewers have watched security guard Brad Hemopo bundle up streaker Adam Holtslag at Forsyth Barr Stadium in Dunedin last weekend. Responses have been divided, with some saying Mr Holtslag got his comeuppance for his nude display, while others felt the tackle was ''over the top''.

Sam Carr, of Dunedin, says he can feel some sympathy for Mr Holtslag. He, too, has felt the call of the wild.

Caving in to the ''egging on'' of mates, he stripped off and attempted to dash across the green turf of Forsyth Barr Stadium earlier this year during the Warriors preseason match against the Brisbane Broncos.

''It wasn't that impressive. But I'm surprised I made it over the fence, to be honest.''

Like many of his fellow streakers, Mr Carr had ''had a few'' drinks beforehand.

''All I really remember is being face down in the dirt and hearing, 'You are going to be arrested' and I said, 'Yeah, sweet'.''

The tackle which felled him was not too painful and was expected.

''They caught me, I got tackled and dragged off the field and got arrested.''

His friends returned his clothes to him in the police car, but he spent the night in paper overalls after he was not content with one streak.

''I tried to do a streak around the station but they [the police] didn't want a bar of it.''

He had no regrets about the incident, although his sons had advised him to never drink beer at their rugby games.

Family and friends had seen the incident as a ''bit of a laugh''. And that was how New Zealand's most famous streaking advocate sees such events.

Former All Black and Otago player Marc Ellis has been an outspoken advocate of streaking.

Streakers should ''pick your circumstance'', but the act should not be seen as taboo, he said.

''I don't think it's a great idea if you are pickled and at a pivotal moment in the game, but most see it and have a laugh,'' he said.

Mr Ellis famously streaked during a provincial match between the West Coast and King Country in 2007 - and he had no regrets about it.

''You are only at your prime to do that thing for a short period.

''But when the moment takes you, you are possessed. You gotta go where it takes you.''

He did not believe a ''nude body running around the paddock'' should be considered offensive.

''If you live your life with a glint in your eye and your tongue in your cheek, I don't think there's too much to worry about.''

As for the tackle on Mr Holtslag, he had little sympathy - ''He spent too much time gloating and he got punished,'' he said with a laugh.

''The rules around streaking are you get on to the ground, run around as fast you can, then get back into the crowd as fast as you can and they are obliged to protect you,'' he said.

The tackle was ''probably a bit more enthusiastic than it needed to be'', but was to be expected when you got on the field.

University of Otago dean of law Prof Mark Henaghan said he did not blame Mr Hemopo for going too far with the tackle, but the incident revealed some ''interesting'' cultural aspects of New Zealand.

''There's an element that sport is entertainment, so anything that adds to that, such as a streaker, adds to the night,'' he said.

''Streaking's been around for a long time and it's always something people got a laugh out of.''

That some people had attacked Mr Holtslag - some online commenters suggesting ''Who the heck cares if he got hurt?'' - was concerning, Prof Henaghan said.

''There's evidence we do react in strong ways after a sporting event, which is a bit strange. It is a game; it's a great game, but it's just a game.''

Miss Scott was named player of the day after her sole Nude Blacks game and gained ''exposure'' in Europe when footage the game was televised by German channel RTL in 2011.

''It's quite a shocking thing for people to see a naked body when it shouldn't be,'' she said.

''I thought we were further along than that.''

Her nude efforts had not affected her life and she felt it was a positive experience.

''It was good for me in the sense that I was a little bit uneasy with the image of my body and it was my way of saying 'This is me and it's just a body'.''

Mr Holtslag was more repentant when he spoke to APNZ this week.

He held no grudges against Mr Hemopo and was uninjured apart from some sore ribs.

Streaking: A briefless history
c. 1050: Lady Godiva rides a horse naked through Coventry, England, in protest against taxes imposed by her husband, Leofric, Earl of Mercia.

July 5, 1799: A man is arrested in London, England, and sent to the poultry compter. He confirmed he accepted a wager of 10 guineas to run naked from Cornhill to Cheapside.

1804: Future US congressman and then Washington and Lee University student George Crump is arrested for running naked through Lexington, Virginia. Confederate General Robert E. Lee later sanctions streaking as a rite of passage for young Washington and Lee gentlemen.

April 1974: Michael O'Brien dashes on to Twickenham during an England-France rugby test. He is escorted off the ground by police, who covered his groin with a police helmet.

January 2, 1982: Erica Roe runs topless across Twickenham during an England-Australia rugby test. A British newspaper publishes a story with the headline ''Titters At Twickers'' the following day.

June 14, 2014: Streaker Adam Holtslag is tackled by security guard Brad Hemopo during the All Blacks-England test match at Forsyth Barr Stadium in Dunedin.