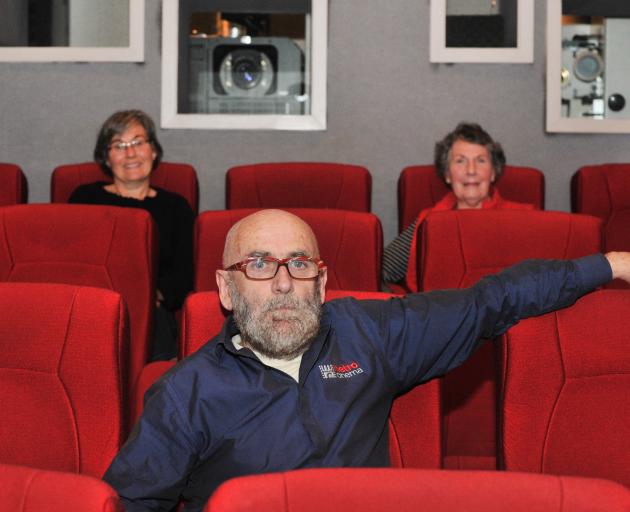 Jacki and mother Roberta Telfer take a seat near Metro Cinema owner John Wilson before the 2pm session started on Saturday. PHOTO: CHRISTINE O’CONNOR
The nimbleness of an experienced small cinema operator may soon start to pay off after Dunedin’s Metro cinema resumed trading at the weekend while the city’s bigger cinema chain multiplexes remain closed.

Metro cinema operator John Wilson, who began operating as an independent in 1995, is cautiously optimistic that his initial post-lockdown weekend offering of a single 2pm matinee session each day may soon lead to more.

He was appreciating support from the community and the Dunedin City Council.

More than a dozen people attended the first show on Saturday, and he had further bookings and sales for yesterday’s show.

After a further matinee today, he plans to move to three shows a day on Thursday and has several new films available, but is also "playing it by ear".

The big cinema chains have their challenges at the moment, including a lack of new blockbuster films — a problem which may not go away until midyear or later.

Mr Wilson has found life extremely tough during the extended lockdown, but there are some early brighter signs, including the bookings.

"There’s an advantage as a small operator. You’ve got more control of what’s happening at your theatre.

"You’ve got more control over what sort of films you can screen," he added.

Roberta Telfer and her daughter Jacki were also happy to be back at the movies again on Saturday, after cinemas had long been closed under earlier coronavirus lockdown phases.

"It makes a nice change, there is only so much Netflix you can watch," Jacki said.

Mr Wilson said social distancing had to be taken into account.

"I have to make sure that everyone sits in their own space," he said.

However, people can remain in their bubbles, and people who came in the same car could sit together.

For multiplex cinemas it would not be viable to fully reopen until the next major film dated for release which was Tenet (July 16), but some possible earlier alternatives were being considered and an announcement would be made soon, she said.

Further details about Reading Cinemas plans were not immediately available.