Muddy, but unbowed, 600 rise to challenge

Otago's inaugural Mud Sweat and Tears was such a splash with competitors that organisers are likely to repeat the event next year.

Many of almost 600 competitors arrived at the Wingatui Racecourse in colourful costumes, which included speedo cops and Asterix and Obelix who, by the end, were covered, head-to-toe, in mud. 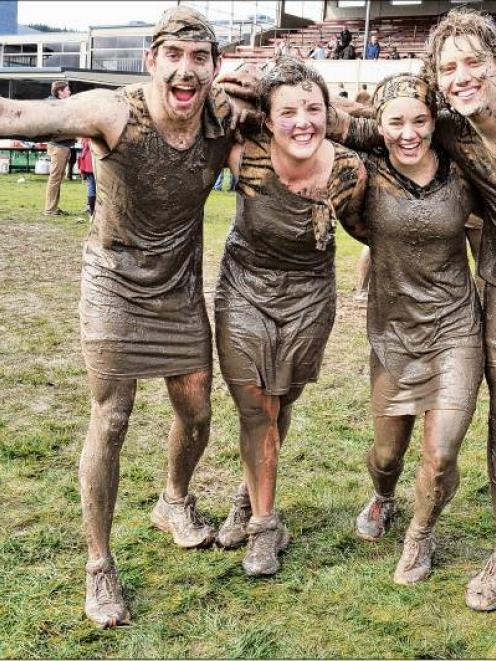 In mud we trust . . . Enjoying the end of a fun morning are (from left) Joey Maloney (21), of California, Gemma Tomsett (21), of Tapanui, Celine Valentine (20), from Washington state, and Felipe Saltz (21), from California.
But spare a thought for competitor Tina Marshall, who slipped in a ditch to the delight of competitors gathered at the start of the 5km course.

"I fell over," she said, an affliction that was soon spread to all and sundry.

However, the greatest challenge appeared to be the constant threat of wardrobe malfunctions and the chants of enthusiastic young children who had gathered to watch the action.

"Head first, head first!!" they demanded of those who approached the large waterslide, while clapping with delight each time someone obliged.

Mud Sweat and Tears race director Kim Preston said the Wingatui waterslide - albeit one with a large amount of mud at the end of it - was far superior to its Christchurch cousin.

"We have been going three years in Christchurch and we don't have a mud slide like this. They are sliding for about 100m, having a great old time."

The Christchurch event was so popular, Mr Preston did not want Dunedin to miss out.

Mud enthusiasts from Invercargill, Christchurch and Queenstown were among those who took part yesterday.

"People are reverting to their childhood, getting among the mud and having a good time chucking mud pies at each other."

"It's good getting off the couch in the middle of winter and having such fun.

Heading for a hot shower after competing in the 10km event was Robert Stout, who said the course was harder the second time around as it changed "from being watery to being a bog".