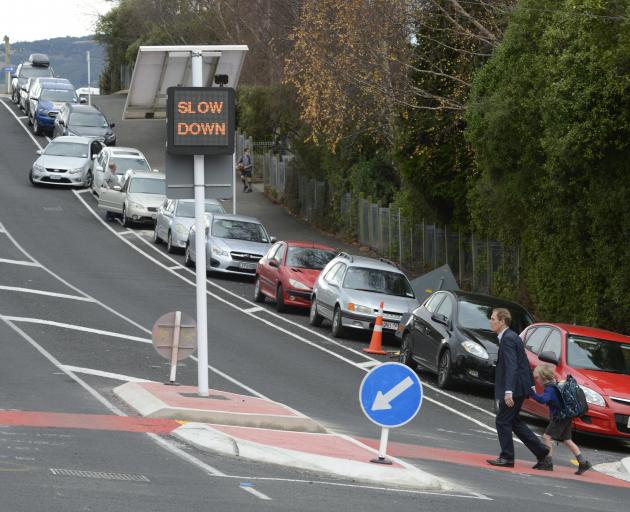 A father and child cross Brown St in Dunedin on one of the city’s new courtesy crossings inside the Central City Schools Cluster safety zone. PHOTOS: GERARD O’BRIEN
Bright colours and big humps are proliferating on Dunedin’s streets, as new traffic-calming measures are rolled out across the city. But as more motorists grit their teeth, knuckles whitening on their steering wheels, a Dunedin city councillor is urging them to remain, well ... calm. Chris Morris reports.

Dunedin city councillor Jim O’Malley has first-hand experience of the benefits of slowing down. 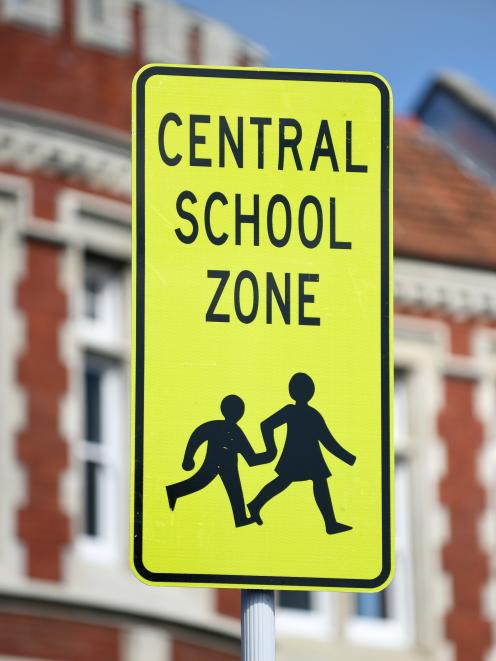 The two-term city councillor was striding along the North Rd footpath earlier this week, when he came perilously close to being hit by a passing car.

Cr O’Malley readily concedes he was part of the problem as he stepped out while unaware a car was pulling in beside the footpath.

But one thing saved him from a collision and the potential for serious injury or death — speed, or rather, the lack of it.

"We were both going slow enough that we missed each other," he said.

It was the kind of encounter that has fuelled Dunedin’s rise to near the top of an inglorious list of statistics in recent years.

Since 2015, 28 people have been killed in crashes, and 369 seriously injured, on Dunedin’s streets — a tally that is getting worse each year.

Among the statistics were two pedestrians killed in separate incidents while crossing inner-city streets in 2017, while together pedestrians, cyclists and motorcyclists made up 49% of all road deaths and serious injuries during the past five years.

The tally helped put Dunedin near — or in some cases — at the top of the list of most dangerous cities in terms of pedestrian deaths and accidents in New Zealand, he said.

It is a grim picture the council is trying to address, helped by other authorities — from police to the Otago Regional Council — sitting alongside it as members of the Road Safety Action Committee.

Cr O’Malley, the DCC’s representative on the committee for the past three years, said the main focus was on introducing "traffic calming" changes to road design to reduce speed.

The reason for doing so could be found in statistics, which showed the likelihood of a pedestrian dying when struck by a car dropped from 80% for a 50kmh collision to 10% at 30kmh.

But it could also be found in the kind of collision he had managed to avoid, Cr O’Malley said.

"It’s the survivability of an impact depending on the speed you’re at, but there’s also another factor — and that’s avoidability.

"If the speed is low enough, there’s a chance to actually respond in time," he said. 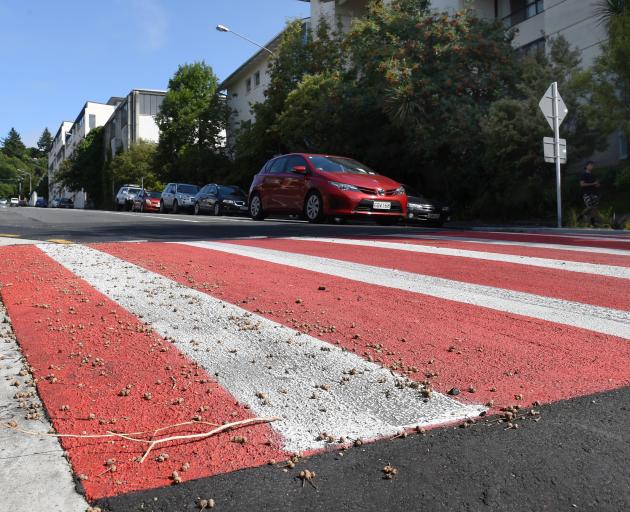 A raised, brightly coloured pedestrian crossing in Rattray St, near Kavanagh College.
As a result, the council had been working to introduce changes on Dunedin’s roads, such as the new speed bumps added in Maori Rd, but in particular focusing on a new Central City Schools Cluster safety zone in City Rise.

The area had three major secondary schools and one primary school, making it a hot spot for children and young adults crossing sometimes busy roads.

The changes included adding new kerb protrusions at the entrances to the zone, designed to narrow roads and force vehicles to slow down when entering, Cr O’Malley said.

"They come in and they slow down and they tend to stay slow," Cr O’Malley said.

Variable-limit digital speed signs had also been installed, which lowered the limit for times around the start and finish of the school day, when pupils were on the move.

Traditional pedestrian crossings had also been forgone, in favour of newer, brightly coloured and raised crossings, including courtesy crossings, he said.

The courtesy crossings, in particular, were seen to be a better way of encouraging motorists to slow down and keep people crossing roads safe than traditional pedestrian crossings, he said.

They were a way of "creating the environment where both parties [pedestrian and motorist] are recognising the rights of the other".

"Sometimes you let the car go; sometimes the car will stop and let the pedestrian go. But you’re both coming into an area that recognises that interchange. There’s two users of the road network right at that spot," he said.

It is also the kind of measure which has prompted howls of outrage from some motorists, who have questioned the merits of the initiatives. 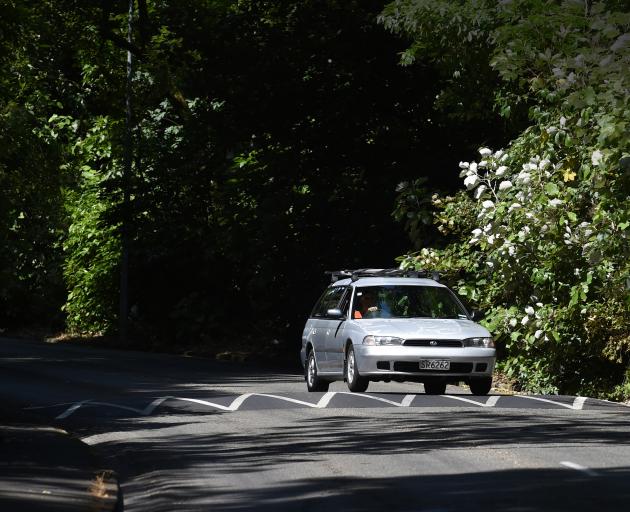 A motorist negotiates one of the new speed bumps installed in Maori Rd yesterday.
City Rise Up spokeswoman Liz Angelo also spoke up in January, questioning the introduction of brightly coloured crossings outside Otago Boys’ High School, which she argued risked turning the notable heritage area into "Disneyland".

City council staff have already responded, saying some of the bright colours were a "defined standard" and would "bed in over time".

Cr O’Malley went further, saying the improvements in City Rise had been requested by the schools themselves, and he doubted motorists were being too badly inconvenienced.

"I would doubt our changes had put 30 seconds on [a] journey, and yet we’ve changed the environment dramatically for the safety of the kids," he said.

More changes could be expected, beginning in South Dunedin where work outside King’s High School had already begun, but eventually extending across the city, he said.

The council aimed to install similar improvements at 15 other schools across Dunedin by July 2021.

"This is a series of roll-outs that is going to go over a few years ... Eventually every school is going to get [improvements]," he said.

Roads to be considered for lower speed limits were those featuring high volumes of vulnerable road users, such as sections of Moray Pl and Great King St, DCC staff said.

It also included rural roads with a high potential for death or serious-injury crashes due to topography, roadside hazards or other factors, such Highcliff Rd and Three Mile Hill Rd.

The review would include public consultation as part of the process.

But, fundamentally, motorists needed to be willing to slow down, Cr O’Malley said.

"I think we are asking for a behavioural change."

Driver calming. Traffic are the things they speed in.