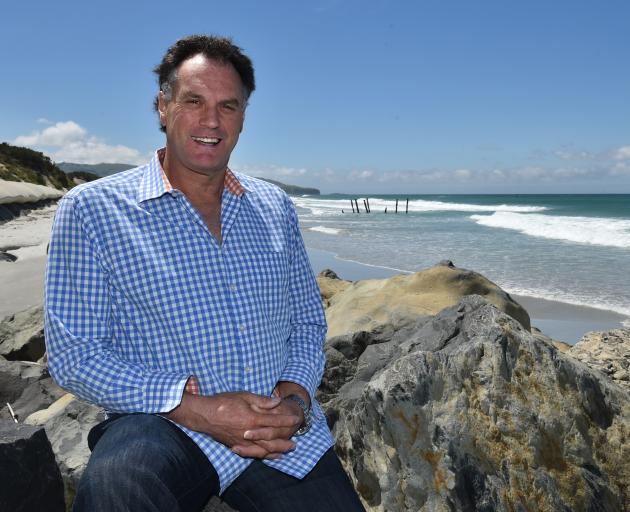 St Clair man Jules Radich envisions a 100m wooden groyne reaching out into the surf. Photo: Gregor Richardson
A proposed wooden groyne at St Clair could aid in the fight against sea-level rise and cause the beach to once again build up with sand, a Dunedin man says.

Jules Radich, who lives on the hills of St Clair, submitted to both the Otago regional and Dunedin city councils this week, urging a groyne be built at the site of the wooden poles at the beach. The design could copy that of the double-row structure built there in 1921.

Mr Radich said in the summer swells pushed sand on to the beach, and the proposed structure could hold it there for winter.

Eventually this would raise the sand level by a few metres, he said.

This would not only make the beach more beautiful, but act as a barrier against sea-level rise.

"It would be a buffer zone of protection for South Dunedin."

As there was already the outline of a structure there it would be easy to get permission, he said.

"So we can build this one and once everyone sees that it’s building up the sand and gets used to the idea, we can put two or three of them here."

Past groynes did not survive as they were not well maintained, he said.

He was passionate about the initiative as he "loved the beach".

"I walk the dog on the beach. I go fishing and diving out here."

He consulted contractors about the project and estimated the  cost to be about $500,000.

The city council could pay for it, but money could also be sourced from a regional council fund, he said.

February would be the ideal time for the groyne to be built, before the sand was swept out again.

A Tonkin and Taylor report in 2011 said "while the existing shoreline is dynamically stable, there is a risk with future sea level rise that landward retreat of the beach face could occur".

To protect the beach from the rock pools to St Kilda  would require 10 such structures, the report said.

South Coast Boardriders Association president Duan Reardon said groynes could be good, but it was important to consult with surfers.

"I suppose if it’s down the beach where the piles are I could see that being pretty good, personally."

The location was very important, he said.

"They’ve got groynes overseas and they break up the swells pretty well.

"It would  definitely bring the sand back. All the sand’s at St Kilda now and you’re struggling to get a car park there on a nice day."

Relevant city council staff were not available to comment on the project yesterday.

This is the first sensible idea I have heard about the beach in 10 years. I would happily donate money toward this project. There is a reason why they are so popular in the UK.

It appears that many years ago the groynes were abandoned, and only some of the poles remain. Of course, any structures built within reach of storm waves can be damaged or destroyed during the winters, and on-going maintenance is expensive.

Not long ago I realised that there wasn't any empirical evidence that any increase in sand levels was caused by the groyne. There are other factors that should be considered, such as fewer winter storms than usual, and more favourable easterly swells than usual. Also, an Otago professor has recently said that there is very little long-shore transport of material at St Clair/St Kilda. The vast majority of waves are *not at an angle to the beach, so groynes will probably be a waste of money.

Goynes, such as in the UK, only work well if there is significant long-shore transport. It has been known by experts since the 1960s that effective groynes will trap sand on one side only, and a bit further down the beach there will be erosion of the foreshore because the long-shore supply of sand has been cut-off by the groynes.

Evidence that an increase in sand levels is *not* caused by the groyne will be a lot of sand on *both* sides of the groyne.