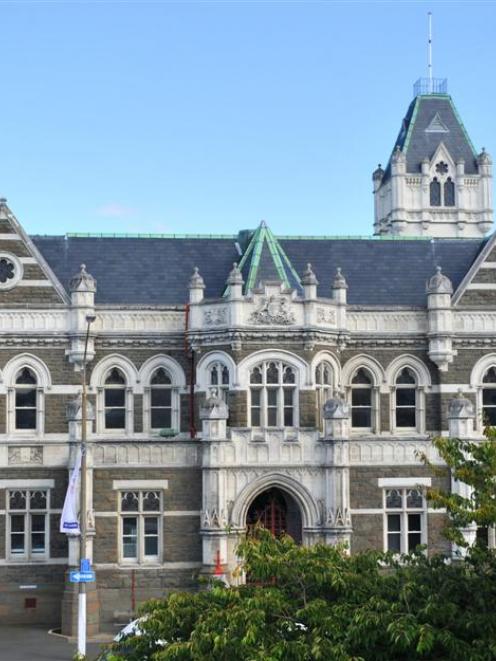 The courthouse is closing indefinitely at the end of this week amid uncertainty about when long-signalled strengthening will be carried out.

Yesterday was the last judicial sitting in the courthouse, and Judge Stephen Coyle said local judges knew no more than anybody else about the building's future.

The Stuart St courthouse had been a significant part of the local community for many years, Judge Coyle said.

The fact yesterday's court session was the last in the building was both ''significant and regrettable'' for the city.

The Ministry of Justice partially closed the building in late 2011 and has still not confirmed when strengthening will start.

The court's remaining services, including the district court, are shifting to the temporary facility in High St.

Building and Housing Minister Dr Nick Smith announced at the weekend Dunedin had been redesignated a low-risk earthquake area.

Mrs Stevens said the new quake ratings showed what ''everybody who lived in Dunedin would know anyway''.

She opposed the move to the ''vastly inferior'' temporary courthouse.

''We're leaving a building that now doesn't need to be done in any hurry. What we're moving to is just so much smaller. The facilities are so reduced.''

Mrs Stevens said lawyers did not have access to the cells in the High St courthouse to see clients, and there was just one interview room for defendants and lawyers.

The same interview room had to be shared with probation and mental health staff, social workers and anyone else requiring a confidential space.

At High St, there was a single entrance, and ''some of the people don't get on''.

''There's going to be health and safety issues.''

The public gallery in the No1 courtroom at High St had only 18 seats for the public.

''There's going to be lots of defendants who can't be in the courtroom,'' Mrs Stevens said.

She said she dreaded the Stuart St courthouse becoming infested with ''rodents and birds''.

Ministry of Justice commercial and property general manager Fraser Gibbs said the ministry was looking at the new quake rules and it was too early to say what they meant for the courthouse.

The High St temporary courthouse, on which the ministry has spent $6.16 million, was ''functional and cost-effective''.

''We have undertaken significant refurbishment there and, like all our courts, we have court security officers on hand to ensure the safety and wellbeing of all court users.

''At present, lawyers in the [High St] courtroom used for list hearings cannot access the cell area, as this would require them to walk through the dock or the public area during court hearings. This week, we are talking to lawyers and other interested parties to discuss a workable solution,'' Mr Gibbs said.

Judge Coyle yesterday highlighted the uncertainty over the courthouse's future in brief remarks at the start of the court session, his last as a resident judge in Dunedin.

He said it was more than three years since part of the Stuart St building had been closed and the Family Court moved to John Wickliffe House.

The move was on the basis that strengthening work would be completed and everyone back in the old building by now.

Judge Coyle, who is transferring to Tauranga, began his judicial career in Dunedin.

He said he had very much enjoyed his time as a judge here. On behalf of the Dunedin Bar, Mrs Stevens told the judge local lawyers shared his sentiments about the building.

Its closure, with the move to the temporary court building in High St, was ''a sad moment for us'', she said.

But everyone would do their best to try to come back to Stuart St and to ''make the new place work''.