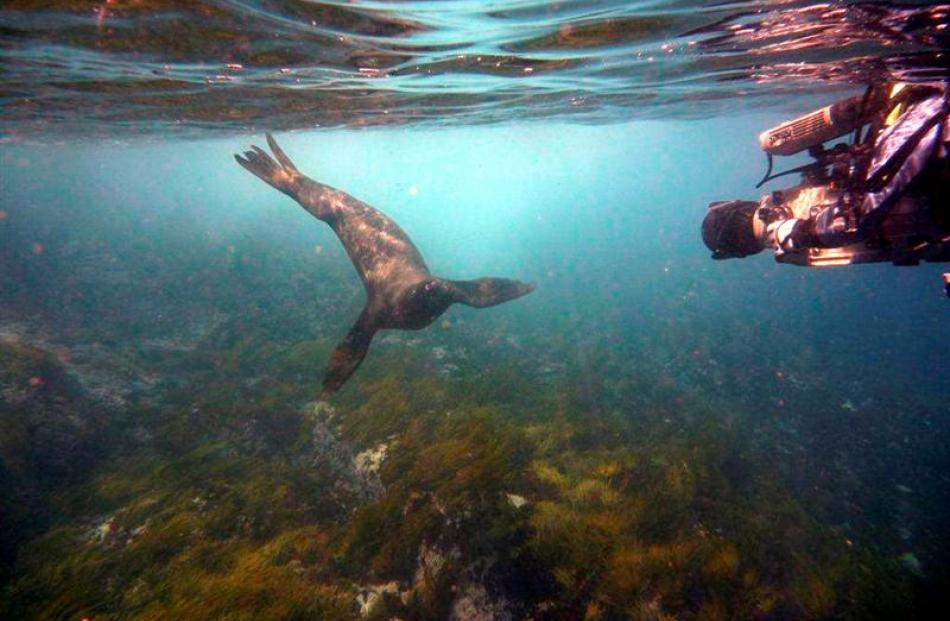 A seal is filmed off the Snares, near Stewart Island, during filming of OceaNZ, by Dunedin television production company NHNZ. Photo by NHNZ.

The secrets of New Zealand's deeps are to be revealed in a new television series by Dunedin production company NHNZ.

The six-part series on New Zealand's ocean environment and sea creatures, OceaNZ, has been described as being ''almost like Coronation St under the sea''.

The one-hour programmes explore six marine locations around the New Zealand coastline and the creatures which call them home.

''Each location will be explored from the perspective of a neighbourhood narrative; from the tiniest barnacles and sea anemones to iconic whales, revealing the daily dramas, challenges and triumphs of those who live in these watery neighbourhoods - almost like Coronation St of under the sea,'' Ms Curran said.

''Many broadcasters have strayed away from underwater - it's a challenging film environment, so it's just wonderful that NHNZ has taken the plunge,'' she said.

''We are probably the best company in the world for this particular production job, as we have really strong experience, we have great gear technicians ensuring our gear is purpose-built for the conditions and the creatures, and our teams are equally skilled under the water as they are topside.''

The series is being produced with $1,680,000 funding from New Zealand on Air.

OceaNZ will be filmed and produced this year and go to air on TV One next year.