New Year's Eve celebrations in the Octagon, Dunedin.
It looks set to rain, but it will take more than a little dampness to scupper the plans of thousands keen to celebrate the end of a challenging year at events across the South this New Year’s Eve.

For those going out tomorrow night, emergency services staff and event organisers have a message — remain vigilant so everyone can continue to enjoy life free of Covid-19 restrictions.

In Dunedin, New Year’s celebrations in the Octagon will begin at 6.30pm.

An "exciting" line-up of Dunedin artists would entertain the thousands expected in the city centre until midnight, when a countdown would herald the start of a fireworks display, Dunedin City Council events special projects co-ordinator Tammy Jackman said.

Acting Sergeant Richard Kupenga said police would have an increased presence in the city and would be working in the surrounding area to deter and catch intoxicated or drugged drivers. 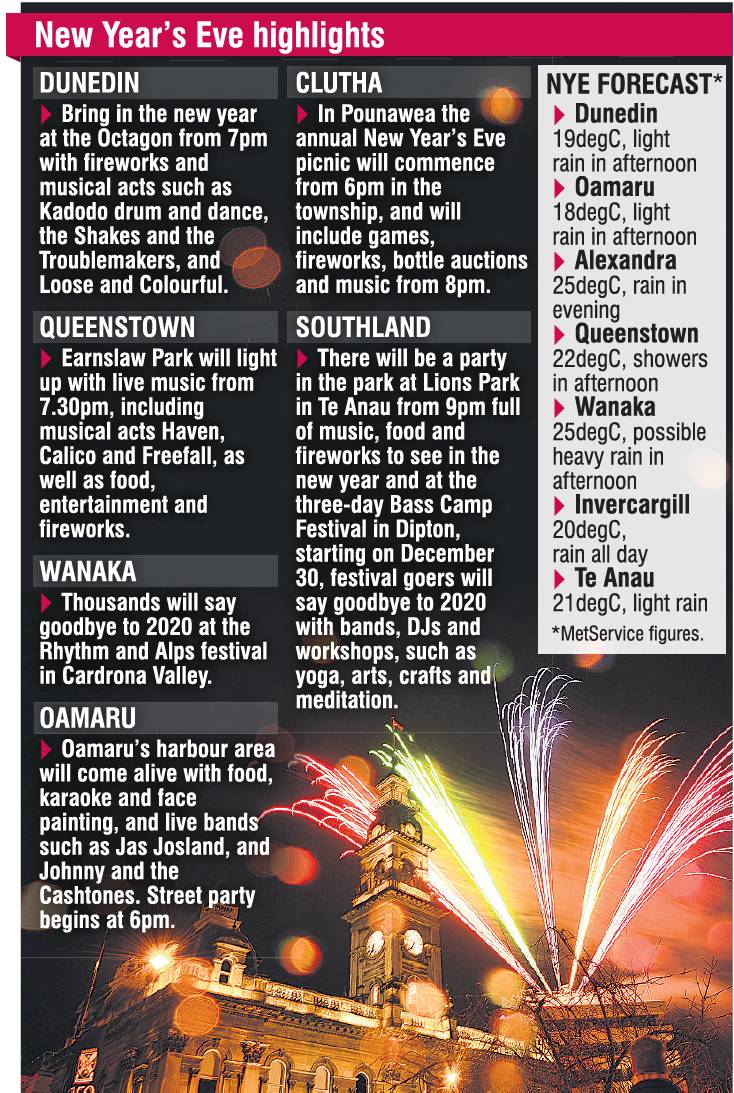 "Police are expecting there will be a degree of mischief but are hoping people will pull their heads in and make the right choices."

In Queenstown, live music on the big stage at Earnslaw Park will usher in 2021, while about 10,000 revellers will continue to party into the new year at the Rhythm & Alps festival in the Cardrona Valley near Wanaka.

Police area response manager Senior Sergeant Miriam Chittenden issued a plea to those planning on partying in the Queenstown-Lakes district over the period.

Parents and caregivers needed to help keep the community safe by supervising their teens and young people, she said.

Police in Wanaka had dealt with several disorder and violence-related incidents over the past couple of nights, resulting from an influx of young people affected by alcohol.

Police were also under a lot of strain as a result of dealing with road accidents, she said.

"That may sound harsh, but our road toll is horrific."

Drink-driving would be targeted and in a disappointing start to the New Year period, police caught several drivers over the breath-alcohol limit yesterday morning, Snr Sgt Chittenden said.

Thirty-seven extra police deployed from Dunedin to help out arrived in Wanaka on Sunday night.

Events are planned right across the region, including public events in Te Anau, Oamaru, Pounawea and Dipton.

Covid-19 is also top of mind for event organisers and emergency services this year.

The planning event "had a good turnout of all the key people involved", including the organisers and representatives from St John, Civil Defence, the Queenstown Lakes District Council and Lakes District Hospital.

"It was really good to talk through various scenarios and make sure we all knew what everybody needed to do should we have the unfortunate incident of a case at Rhythm & Alps."

Festival organisers had put extra hand-washing facilities and sanitiser stations on site, and also set aside an area where people could be isolated if need, Dr Jack said.

There was also a plan should someone need to be tested.

Organisers of other gatherings, such as the Whare Flat Folk Festival in Dunedin, had also been contacted and given public health information to keep people at their events safe, she said.

The key message was people should not attend events if they were feeling unwell and experiencing Covid-19 symptoms.

Unlike Sydney, which has put tight restrictions on its New Year’s Eve fireworks display, southern events would be able to proceed as normal, Dr Jack said.

"We are in Alert Level 1, so there are no restrictions on numbers or events.

"If we were to see community cases here, that might change, but at this stage we are just asking people to be flexible and careful and support the work that New Zealand has done to get us this far."

Unfortunately, fine weather is not set to come to the party.

MetService meteorologist Lewis Ferris said "sadly" the weather across the region tomorrow was not shaping up well.

Wet weather was on the way for Otago and Southland.

Part of Central Otago would start with a nice day tomorrow, but rain would settle in, he said.

Oamaru looked set to have the most clement New Year’s Eve.

It was likely a low-pressure system developing over the South Island would bring easterly winds, and a significant amount of rain, particularly for Dunedin, to usher in the new year.