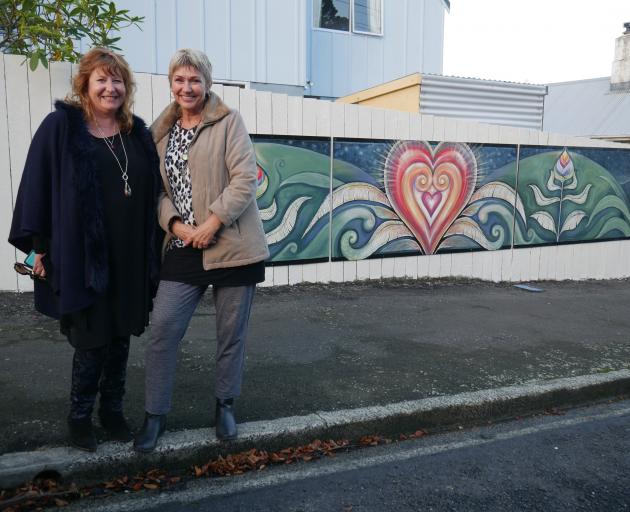 Jacqui Tangney painted a mural for the night shelter’s fence about two weeks ago after winning a competition.

Dunedin Night Shelter Trust board member Jenny Turnbull said they wanted the night shelter to be more visible after some people commented they could not find it.

So, last year they invited members of the public to design a mural.

There were 18 entries, including some from schoolchildren, which were on display at the Meridian Mall for about a week.

A selection of judges picked Ms Tangney’s design as the clear competition winner.

"We just thought that this one looked pretty amazing," Ms Turnbull said.

Some of the other mural designs were collated and made into a calendar, which was sold as a fundraiser.

When designing her mural, Ms Tangney wanted it to reflect that the night shelter was a heart and warm place in the community.

Through her job, she met many people who stayed at the night shelter and was grateful it was there.

"When most of us are at home being quite comfortable, this is a place people can come," she said.

The candles on either side of the heart represented the night shelter’s light.

"Then it just evolved."

The mural also features the hills of Dunedin and the night sky.

The night shelter, in Lees St, offers free emergency accommodation to anyone in need.