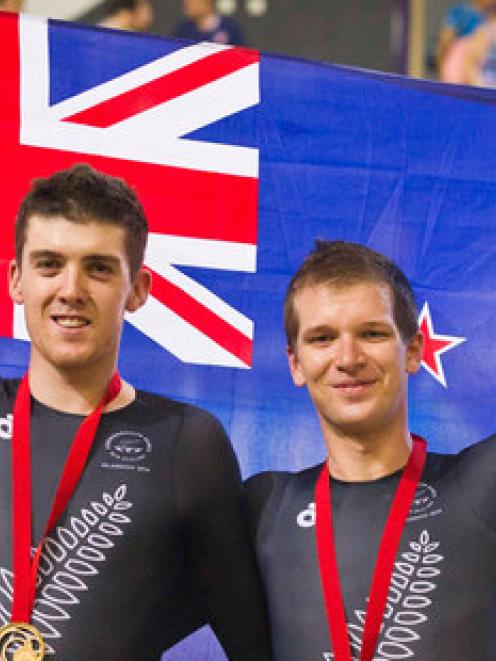 Too much indulgence and late nights are always what the boss hears come Monday about 8am.

But the Scullys, in Cromwell, are more than entitled to be shuffling a bit slower than normal today.

It is not every weekend you can offer up this excuse for failing to fire on all batteries: ''My son won a Commonwealth Games gold medal at the weekend.''

Matt and Wendy Scully were proud parents just before 6am yesterday when they saw their son, Tom, win the cycling points race in Glasgow.

He followed in the footsteps of two other Otago cyclists, Glen Thomson (1998) and Greg Henderson (2002), who also won the event.

Tom Scully (24) was the commanding individual in the event - he won six of the 16 sprints and put three laps on the field to win easily.

His proud mother tried to sleep on Saturday night but admitted it was a hopeless exercise.

''We watched the qualifying at 11pm and then we thought we'd better get some sleep before the final,'' Wendy said.

''But there was not much sleep. My daughter texted me from Christchurch saying she couldn't sleep. And that was at 3am. Then some friends arrived at 5am, wanting to get us up.

''But I'm absolutely so proud of him.

''It has been a long journey for him. A lot of hard work has gone in from him.''

Tom rang his parents after the race and spoke to both of them, talking of the elation of the win, although the conversation with his mother was cut short: ''He said, 'I'm going to have to go. I've got to get some food - I'm hungry.''

Tom was educated at Cromwell Primary School and Cromwell College before shifting to Invercargill in his teenage years to race on the indoor velodrome.

He won the silver in the points race at the world championships in Colombia earlier this year, and is part of a strong effort at the Commonwealth Games by the New Zealand cycling team.

The New Zealand track campaign is not finished yet - and neither are the Scullys.

Qualifying began about 2am and the final, if Scully made it, was to start about 5am. Quite likely it was another long night for his parents back in Cromwell.