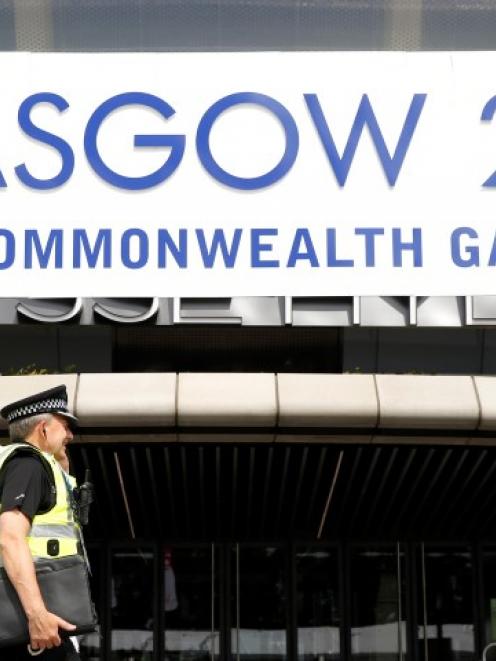 A police officer provides security in preparation for the Commonwealth Games in Glasgow. REUTERS/Jim Young
Australia's reign atop the Commonwealth Games medals table faces its biggest threat in decades at Glasgow and the team's management has been at pains to prepare the sports-mad public for the worst - defeat by England.

Barring a designer-driven cringe over the athletes' "granny-knit" uniforms, the Games have been largely off the radar for most Australians, with the football World Cup looming large over the sporting landscape.

In recent days, however, the country has gradually woken to the fact that another sporting showdown with their former colonial masters is at hand.

Pumping up the traditional 'Ashes-style' rivalry of the hard-fought cricket series is generally page one in the playbook of local promoters where England are concerned.

Losing to England is another matter, however, yet the near home-ground advantage the English will enjoy has had Australia's delegation chief Steve Moneghetti talking down the usual rivers-of-gold expectations.

"I think we will have our work cut out just to win the medal tally let alone dominate it," he told local media.

"Delhi was in our side of the world and India took a high percentage of medals. There will be a far greater spread of medals.

"(For England) there is the aftermath of London, the fact it is basically a home Games, they have spectator support, the same weather, so that ticks about 10 boxes they have covered and we have one, and that is that we are just good."

Australia have topped the medal count since 1990 and won it comfortably at the 2010 Delhi Games with 74 gold, 55 silver and 48 bronze as England and other delegations rested top athletes to prepare for the London Olympics.

That many of the country's 16 silvers at that Games were earned behind triumphant British athletes was lost on no-one and, like the Glasgow organisers, many Australian coaches will be thrilled that England are bringing a strong team.

A good performance against England at Glasgow may help Australia forget the 'embarrassment' of finishing only 10th in the medal standings at London, but officials would sooner wear a public backlash for a poor one if it were used as a springboard to greater success at the 2016 Rio Olympics.

The swimming team, however, might be one notable exception, with anything less than a motherlode of gold likely to be seen as abject failure.

Australia's powerful swimmers have generally been relied upon to lead off Games with a bunch of titles, getting the medal tally off to a flyer while firing up broadcast-watching fans at home.

Instead, the team slumped to their lowest haul from the pool in 20 years in London and were further embarrassed by revelations of sleeping pill abuse, drunkenness and mismanagement that followed.

Many have a point to prove, including 100 metres freestyle world champion James "The Missile" Magnussen, who was raging favourite at London but swam below his best for a silver.

His duel with team mate Cameron McEvoy, who pipped him at the national championships earlier this year, will be among the best in the Glasgow pool.

Olympic champion Sally Pearson will be on track to defend her 100 metres hurdles gold and will also line up in the 100m sprint.

Pearson won the flat sprint in Delhi but was left in tears when she was controversially stripped of the gold after a protest, having been allowed to race despite making a false start.

Australia's track cycling queen Anna Meares will miss her great British rival Victoria Pendleton in the sprint, but the twice Olympic champion will become her country's most decorated Commonwealth Games cyclist if she adds two more medals to the four gold, one silver and a bronze.

Australia's athletes will also be buoyed by the fact they have a green light to party in Glasgow, despite a new Olympic policy banning them from drinking - or being drunk - at the Games village in Rio after complaints at London.

The swimming team, however, will be "dry" throughout.