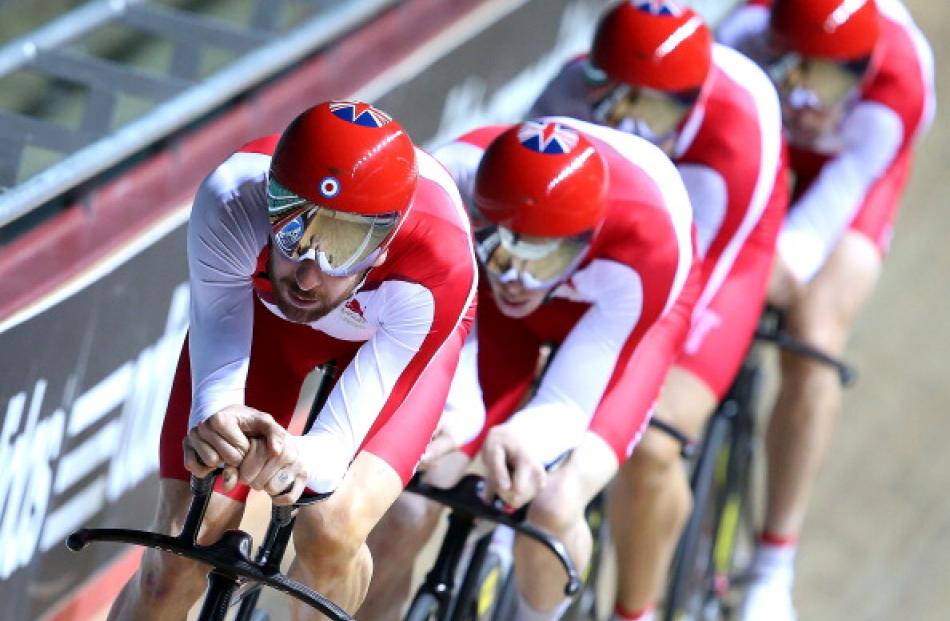 Bradley who? If the idea of the champion British rider Bradley Wiggins returning to the track and being a catalyst for English Commonwealth Games team pursuit glory, the New Zealand reaction was distinctly understated today.

Wiggins, double gold medallist in individual and team pursuit at the Beijing Olympics six years ago, has ridden on the track for Britain only once since then, helping secure a team pursuit gold at a World Cup event in Manchester in the 2010-11 season.

The quirky knight of the realm has his sights set on a record-setting eighth medal at the Rio Olympics, and this is the first step back on the track for the 2012 Tour de France champion.

He will ride the team pursuit, but not the individual as initially thought. However New Zealand's position is there won't be any tossing and turning over 34-year-old cult hero Wiggins' return.

"No one scares us," pursuit rider Shane Archbold said today.

"He's been off the track a long time now. He's won the Tour de France and he's done numerous other things in his career.

"All we can do is go out and test the time."

If Wiggins is expected to be a one-man force of nature, New Zealand's riders are sceptical.

"The English didn't perform as Great Britain at the world championships this year and they're hoping he's going to make the big difference.

"They've got a lot of gains to make and if one person can do that, it would be very impressive," Archbold added.

The point is Wiggins' physique has changed with his years on the road. Speed out of the blocks may be an issue, but as one of New Zealand's track riders put it today ''you never forget how to ride a bike".

High performance boss Mark Elliott also sounded a cautionary note on just how significant Wiggins' impact can be, while taking the chance to spruik the substantial steps being made by New Zealand's track group.

The sprint team are world champions, the pursuiters won bronze at both the London Olympics - behind Britain and Australia - and this year's world champs in Colombia.

''The exciting thing for us as a team is we're bringing young guys into the programme and the Brits are still relying on the old guard," Elliott said.

''Someone like Wiggins has done some amazing things, but this is the track."

If Wiggins wins a single medal in Rio, he will become Britain's most decorated Olympian, with eight medals. Retired track sprint great, Chris Hoy - after whom the Games velodrome in Glasgow is named - also has seven, but six golds to Wiggins' four.

There is a reverence afforded Wiggins when England's track riders talk of his return to their arena.

Wiggins' star may have lost a touch of its glow since he was dumped from Team Sky's Tour de France team, amid claims that apart from a well-publicised antipathy with team leader Chris Froome, other members of the group felt he was less of a team player than he might have been.

Still, if Wiggins can inspire England when the track programme starts on Thursday night (NZT) his star will gain a touch more lustre in the adoring eyes of those who can't see him doing any wrong.