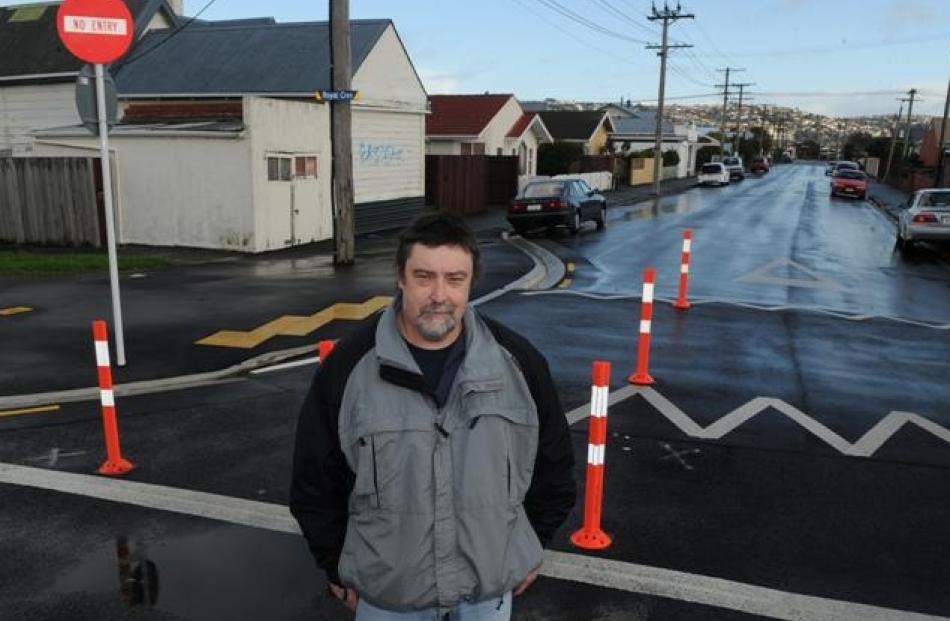 Marlow St resident Trevor McStay is not happy with the new markers installed by the Dunedin City Council. Photo by Craig Baxter.

Markers have been installed in Marlow St to further deter drivers from entering the St Kilda street from the Royal Cres end, further angering residents.

The street has been designated a ''quiet street'' under the South Dunedin cycle network and its two-way intersection with Royal Cres has become a one-way exit-only from Marlow St.

Some unhappy residents have started a petition calling for the street to be returned to its previous state.

Resident Trevor McStay said quite a few drivers were ignoring the changes and driving through in protest.

The installation of the markers last week just added to people's unhappiness about the changes, he said.

So far about 600 people, many from surrounding roads also affected by cycleway works, had signed the petition, which residents plan to present to the council at a meeting on Thursday.

Dunedin City Council transport project engineer Evan Matheson said the orange markers were installed to further emphasise people should not be entering the street at that intersection.

''People have still been driving in there.''

The markers indicated where the kerb would be extended to if the next stage of cycleway work was approved at next week's council meeting.

''That should reinforce what the new arrangement is.''

Transportation group manager Gene Ollerenshaw last month said the council was finding it was having to do bigger build-outs than expected on parts of the project.

Mr Matheson said while there was physical separation on Royal Cres between motorists and cyclists, on Marlow St cyclists and motorists would share the road.

If the work was approved additional kerbing, road markings and signage would be added, making the separation on the street clearer, he said.

Tenders for the work had been called for and could be let as soon as the end of the month, depending on the council's decision.