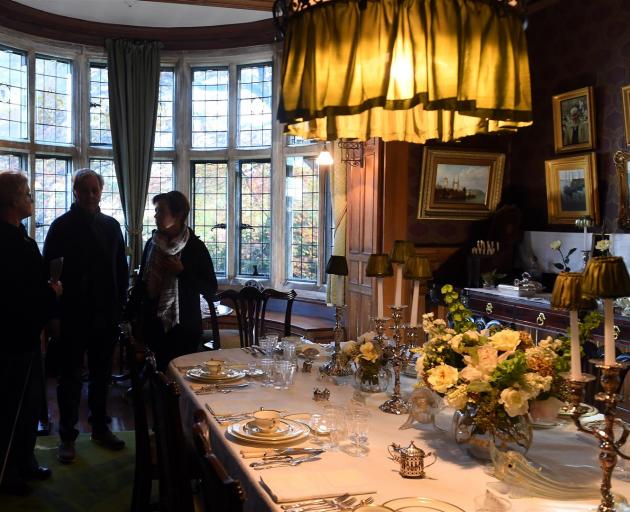 Olveston Historic Home interim manager Bronwyn Simes (left) with tourists Steve and Louise Mitchell, of Melbourne, in the dining room on a free tour of the Dunedin home yesterday. Photo: Stephen Jaquiery.
Olveston Historic Home staff are ''disappointed'' they were left in the dark about a planned power outage in central Dunedin being cancelled.

Home interim manager Bronwyn Simes said she received a letter from her electricity supplier, Trustpower, on April 6 about the power supply to the home in Royal Tce being shut down between 9am and 3pm yesterday for pole replacement.

To prepare, she got contractors to turn off ''the services'' in the home yesterday so when the power was cut it would not cause problems.

As the services, such as the cash register and heating, were unavailable, the home was closed for the day.

Despite the sign on the door detailing the closure, about 40 tourists rang the bell yesterday asking for a tour.

To ensure the tourists' satisfaction, a free private tour of the home was given on the understanding if the power was cut, the tour was over.

However, the expectation of a power cut yesterday was unwarranted.

The Aurora Energy website said the planned work, which affected 97 customers, had been cancelled.

However, no-one contacted the home with the news.

Ms Simes said it was ''inconvenient'' to be left in the dark about the cancellation and it was ''disappointing'' the business had been disrupted.

Delta network operations and risk general manager John Campbell apologised for the inconvenience caused by the cancellation of the planned power outage.

''Unfortunately, out-of-town contractors working on the fast track pole programme were on delayed flights back to Dunedin after visiting their families for the Easter holidays.''

An update was put on the Aurora Energy website but there was insufficient time to notify affected customers directly.

The planned power outage would be rescheduled for a later date, he said.

Tourist Steve Mitchell, of Melbourne, said it was a ''privilege'' to tour the home yesterday, despite the looming possibility of it being cancelled at any time.